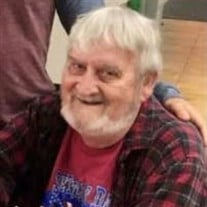 ALL PREVIOUSLY PLANNED SERVICES FOR (TODAY) FRIDAY - JANUARY 15TH - HAVE BEEN CANCELLED. Dorman Gail Morse passed away in Dewey on Jan. 12, 2021. The proud veteran, family man and all-rounded go-getter was aged 74 years and 8 days. Dorman was born on Jan. 4, 1947, to John Frederick and Bertha Mae (Gates) Morse in Independence, KS. He grew up with his sister Joycelind. Shortly after high school he enlisted in the US Air Force and served two tours in Vietnam from 1965 to 1970. On April 30, 1971, Dorman married the love of his life, Darlene Dorothy Lawrence, in Phoenix, AZ. The couple moved northeast to Show Low, AZ, where they raised their daughters Julia and Karen. Dorman and Darlene eventually settled in Elk City, KS, before moving to Dewey in 2016. Dorman was a loving husband, father, and grandfather. Family was such an important part of his life, especially his grandchildren. He was a man who was known for doing any job well. He was very active in the community when the family lived in Elk City and helped run their recycling program, as well as a lifelong member of the VFW (Veterans of Foreign Wars). Dorman had a silly sense of humor and was ornery, as well he was also a proud veteran and well-rounded man. He had a love for old westerns and classic country music. He enjoyed cross stitching and quilting and had made quilts for each grandchild. He loved to cook and bake, and his specialties were apple pie and cherry pie. Most winters, Dorman loved going to visit his daughter Karen in Arizona. He enjoyed spending time going to different sporting events with his grandchildren and his son in law Rico encouraged him into liking the Arizona Cardinals. Dorman loved spending time with his grandchildren and would pick up new hobbies to spend quality time with each of them. Dorman is preceded in death by his parents, grandmother Clarice Owens, and loving aunt Sandra and uncle Shorty Aemisegger. He is survived by his loving wife of 49 years, Darlene; two daughters, Julia Ernest and husband Judd of Bartlesville, and Karen Gamboa and husband Rico of Glendale, AZ; six grandchildren, Xavier Gamboa of AZ, Andrew Dodson and wife Kaleigh of Bartlesville, Gina Monroe and husband Dylan of Glendale, AZ, Matthew Dodson of Waco, TX, Dakota Gamboa and boyfriend Josh of Santan Valley, AZ, and Allie Ernest of Bartlesville; six great-grandchildren Aubrey, Charlee, Braxlee, Brooklyn, Xander, and Cachten; and sister Joycelind Wilson and husband Andy of Neosho, MO. In lieu of flowers, Dorman’s family has asked that donations be made to Washington County SPCA, 16620 OK-123, Dewey, OK 74029, or the Animal Rescue Foundation (ARF) 399519 US-60, Bartlesville, OK 74006. Friends and family are encouraged to wear red for R.E.D. Friday to show solidarity and support for our deployed service members. All previously planned services have been cancelled. Arrangements are under the direction of Carter Davis and the Davis Family Funeral Home. Online condolences and remembrances may be shared at www.DavisFamilyFuneralHome.com.

The family of Dorman Gail Morse created this Life Tributes page to make it easy to share your memories.

Send flowers to the Morse family.