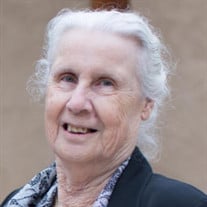 Dorothy Bowles of Bartlesville, OK, died Wednesday in her hometown. She was 76 and had lived a life filled with lots of love, family and friends. Everything else that she loved was centered around her people and making sure they were all fed, hugged and taken care of. Dorothy was born the daughter of Clyde and Catherine (Chastain) Moreland on May 26, 1944, in Tulsa, OK. At a young age the family moved to Vinita, OK, where she was raised and educated. After Dorothy married her high school sweetheart George Oscar Bowles on May 12, 1961, in Vinita, they made their home in Bartlesville and raised three sons. Over the years Dorothy worked at various local stores including Walmart, Kmart and Lowes. As a door greeter at Walmart, Dorothy was a people person who loved the many hugs she received from her customers, and the sprightly lady was always ready to chase down shoplifters but was not allowed to by store management. Dorothy enjoyed gardening and her green thumb meant that she often grew more vegetables than her family could eat. So she would send George out to give them away and her tomatoes, peppers and squash were always a big hit with the lucky recipients. She was also an avid garage sale enthusiast - Dorothy once tried to have her own garage sale, but when people asked George how much something was, he just gave it to them for free. After 45 years of loving marriage and giving away Dorothy’s stuff, George preceded her in death in 2006. Like George, Dorothy was a generous giver. When the boys were young, all of their friends knew they were welcome at the Bowles’ house. Dorothy always loved having everyone over and preparing a full table of food for everyone to enjoy. Family game nights were epic and sometimes lasted for days on end - her favorite game was scrabble and she had her dictionary handy just in case clarification was needed. Most of all she loved her family and drinking coffee for hours on end, just talking to those she loved. Dorothy will be dearly missed. Dorothy is survived by two sons George Oscar Bowles Jr, Christopher Shannon Bowles and husband David Gutierrez Alvarez; daughter in law Crystal Bowles, one sister Virginia Inez Holt; and two grandchildren Elizabeth Bippus and husband Brian, and Dylan Michael Bowles. She is preceded in death by her parents, husband George, son Michael Bryan Bowles, and sister Nonnie Moreland. Visitation will be held Monday, 10-8, with family receiving friends from 6-7, and a rosary to follow at 7-8 at Davis Family Funeral Home – Walker Brown Chapel. Funeral Mass will be held 10 a.m. at St John Before The Latin Gate in Bartlesville. Interment to follow at Memorial Park. Services are under the direction of Carter Davis and the Davis Family Funeral Home – Walker Brown Chapel. Online condolences and remembrances may be shared at www.DavisFamilyFuneralHome.com.

Dorothy Bowles of Bartlesville, OK, died Wednesday in her hometown. She was 76 and had lived a life filled with lots of love, family and friends. Everything else that she loved was centered around her people and making sure they were all fed,... View Obituary & Service Information

The family of Dorothy Kay Bowles created this Life Tributes page to make it easy to share your memories.

Dorothy Bowles of Bartlesville, OK, died Wednesday in her hometown....

Send flowers to the Bowles family.