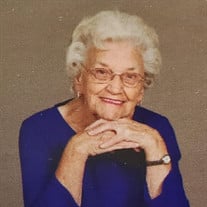 Dorothy Jean Crouch, 89, lifelong Dewey Oklahoma resident, passed away Saturday April 11, 2020, in her hometown. Dorothy was born on April 20, 1930 to Von and Roxie (Easley) Coke. She was raised in Dewey and graduated from Dewey High School in 1949. She began working at Lemons Grocery Store until she began working for Phillips Petroleum Co. in 1953, where she started as a part-time elevator operator before being promoted to a full-time key punch operator working on the company’s data entry. She met James “Tom” Ray Crouch during one of the Saturday night dances. They were married on May 5, 1962, in Bartlesville, OK, but made their home in Dewey where they raised three wonderful daughters. After Dorothy had retired from Phillips in 1985, she spent time on the road with Tom and enjoyed every moment with him just being in the truck together. She attended livestock shows and was a member of the Dewey FFA Alumni. She attended all of the sporting events for her children and grandchildren, never missing a single one. She enjoyed crocheting and sewing, as well tending to her flower and vegetable garden. Her favorite moments were always spent watching her grandchildren at the Wann Round Up Club. Dorothy was always a woman on the go; she loved visiting with friends, taking weekend trips with her daughter Lisa, and especially all of her memorable trips to Las Vegas. Dorothy is survived by her three daughters, Lisa Crouch of Dewey, Carla Crouch of Bartlesville, and Darla Burwell and husband Calvin of Wann; three grandchildren, Colby Burwell and wife Amber of Wann, Markeshea Gailey of Ramona, and Lacey Jo Gailey of Owasso; and five great-grandchildren, Cylan, Corbin, Cannon, Malachai, and JoJo. She is preceded in death by her husband James, parents, brothers Merle and Earl Coke, sister Lola DuPuis, and granddaughter Cerena Burwell. Visitation for Dorothy will be held from 10-8p.m. on Wednesday at Davis Family Funeral Home – Dewey Chapel, 113 S. Osage Ave in Dewey, OK. A graveside service will be held 2 p.m. Thursday at the Dewey Cemetery Pavilion. Arrangements are under the direction of Carter Davis and the Davis Family Funeral Home – Dewey Chapel. Online condolences and remembrances may be shared at www.DavisFamilyFuneralHome.com.

Dorothy Jean Crouch, 89, lifelong Dewey Oklahoma resident, passed away Saturday April 11, 2020, in her hometown. Dorothy was born on April 20, 1930 to Von and Roxie (Easley) Coke. She was raised in Dewey and graduated from Dewey High School... View Obituary & Service Information

The family of Dorothy Jean Crouch created this Life Tributes page to make it easy to share your memories.

Send flowers to the Crouch family.