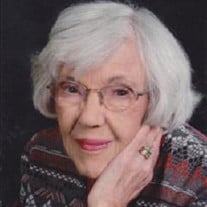 Dorothy West, 92, of Bartlesville, died Thursday in Bartlesville. Mrs. West has been transported to Smith Funeral Home in Anadarko, OK. Local arrangements were under the direction of Carter Davis and the Davis Family Funeral Home – Dewey Chapel. Dorothy Lucille Wilkes West passed away July 2, 2020 at the age of 92 in Bartlesville, Oklahoma with her daughter at her side. Dorothy was born in Anadarko, Oklahoma February 1, 1928 to L.D. and Anna Mae (Montgomery) Wilkes. She had a twin brother, Donald, who died in infancy. The family later moved to the Chickasha area, where Dorothy attended and graduated from Friend School. On November 11, 1945 she married E. Clayton West at the Wilkes family home. The couple remained in the Chickasha area after Clayton's honorable discharge from the U.S. Air Force. In 1948 they moved to Anadarko with their infant daughter, Carolyn. Dorothy worked as a telephone operator before managing the office at Clayton's Glass & Upholstery, the family owned business. During Carolyn's school years, Dorothy was a frequent chaperone for school activities, band trips and church camps. She & Clayton served as youth directors at Bethel Baptist Church, and their home was a popular gathering place for area teens. In her later years she was a devoted Sunday school teacher for young children and continued to follow their progress through high school and beyond. After retirement Dorothy also enjoyed volunteering in the auxiliary at the Physicians Hospital and was later employed as the volunteer coordinator. During her free time, she enjoyed sewing, crochet, cross stitch, and reading. In November 2016 Dorothy relocated to Bartlesville to be closer to family. She was preceded in death by Clayton, her loving husband for 65 years, her parents, her twin brother, Donald Wilkes, and her sister, Ruby Prather. She is survived by daughter Carolyn Oldroyd and husband Jim of Bartlesville, grandsons, Matthew Oldroyd of Bartlesville and Chris Oldroyd of the Czech Republic, great-grandson, Elliott Oldroyd of Bartlesville, and great granddaughter, Elysian of the Czech Republic, sister Delores Wilkes Smith of Chickasha, a number of nieces and nephews, and a host of friends. The funeral service will be held at 2 p.m. Wednesday, July 8, 2020 at the First Baptist Church with Pastor Lynn Bellamy officiating. Interment will follow in the Fairlawn Cemetery, north of Chickasha under the direction of Smith Funeral Home. In lieu of flowers, please consider a memorial contribution to the Children's Ministry at the First Baptist Church of Anadarko or your favorite charity. Services under the direction of Smith Funeral Home, Anadarko, OK. Messages of condolences may be sent to: www.smithfuneralservices.com

Dorothy West, 92, of Bartlesville, died Thursday in Bartlesville. Mrs. West has been transported to Smith Funeral Home in Anadarko, OK. Local arrangements were under the direction of Carter Davis and the Davis Family Funeral Home &#8211; Dewey... View Obituary & Service Information

The family of Dorothy Lucille West created this Life Tributes page to make it easy to share your memories.

Send flowers to the West family.