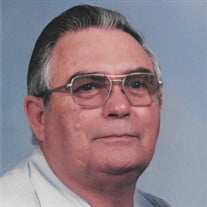 Douglas Barnett, 85, of Bartlesville, died Tuesday in Bartlesville. Douglas or Doug as he was known was born the son of Ray and Ruby (Griggers) Barnett on Feb. 2, 1934, in Los Angeles, CA. When he was in grade school, his family moved to Childers where Doug developed his love for rodeo and playing basketball, graduating with the Childers High School Class of 1952. During this time, he noticed a girl working at the theater and oftentimes went to the movies to see her more than the show itself. He was united in marriage with Melba Irene Parrish and soon after, entered the U.S. Army and served in Germany at the Berlin Wall with tanks. Once home Doug entered the auto body repair business in Nowata and eventually retired from Mark Roberts Paint and Body Repair. They enjoyed more than 40 years of loving marriage until Melba’s death in 1996. Doug was lucky enough to reconnect with longtime friend Neldeen Bowen when her car window stopped working. They rekindled a relationship and after 20 years of loving friendship decided to marry on Dec. 28, 2016, in Bartlesville. Together they had fun fishing for crappie, attending bluegrass festivals and visiting family in Branson. For many years he looked forward to his annual fishing trip to Lake Fort Texas with his step son Marion. But most of all Doug loved to tell funny stories to anyone who wanted to be entertained or swop a tale or two. Doug is survived by his loving wife Neldeen of the home; daughter Dianna Marie Fields and Michael of Bartlesville; step children, LeAnn Smith of Wann, JoAnn White & Jim Brown of Copan, Marion Kincaid of Peru, KS, and Mike Kincaid & Dianne of Dewey; brother Buck Barnett of Oklahoma City; six grandchildren Donald Bailey, Lacey Jo Barnett & Brandon Brown, Corey Barnett & Cindy, Kristi Phelps & Chris, Brandy Price, Kanyon Kincaid, Hunter Kincaid, Tanna Kincaid and Kendall Kincaid, 15 great grandchildren, two great great grandchildren, and close friend Lee Goodin. He is preceded in death by his parents, first wife Melba, one son Danny Ray Barnett and five brothers. In lieu of flowers memorials may be made to The Journey Home, 900 NE Washington Blvd., Bartlesville, OK 74006 or to the SPCA 16620 OK-123, Dewey, Ok 74029. Funeral services will be held 3 p.m. on Friday, March 22, at the Davis Family Funeral Home – Walker Brown Chapel. Services are under the direction of Carter Davis and the Davis Family Funeral Home – Walker Brown Chapel. Online condolences and remembrances may be shared at www.DavisFamilyFuneralHome.com.

Douglas Barnett, 85, of Bartlesville, died Tuesday in Bartlesville. Douglas or Doug as he was known was born the son of Ray and Ruby (Griggers) Barnett on Feb. 2, 1934, in Los Angeles, CA. When he was in grade school, his family moved to Childers... View Obituary & Service Information

The family of Douglas Barnett created this Life Tributes page to make it easy to share your memories.

Send flowers to the Barnett family.