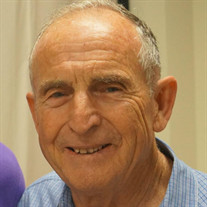 Mark Bailey, 82, of Bartlesville passed away in his home on Aug. 24, 2020, after a hard-fought battle with leukemia. Mark was born to Jeff and Mazie Bailey on March 28, 1938, in Haynesville, LA, as one of 10 children. Like many rural families at that time, they knew hard times but what they lacked in material possessions they made up for in love and laughter. Mark graduated from Summerfield High School in 1956 as class valedictorian and in 1960 received his B.S. in Chemical Engineering from Louisiana Tech. Mark was hired by Phillips Petroleum in 1960 and worked in its Borger, TX, plant. On Dec. 29, 1961, Mark married Rachel Tripp in Springhill, LA, and they made their first home in Borger. They settled into married life and had four children - Elizabeth Lynette, Mary Lyneese (who died shortly after birth), John Michael, and Kristie Anne. In 1963, Phillips transferred Mark and Rachel to Bartlesville which became their much-loved permanent home. They were committed Christians and attended First Assembly of God (now Spirit Church) almost their entire 58 year marriage. Throughout his life, Mark went on mission trips, enjoyed playing sports, volunteered with school programs to tutor children, volunteered at Agape Mission, served as both a Sunday School teacher, and Superintendent, and a deacon in his church, and quietly gave philanthropically. During this time Mark enjoyed watching his family grow - first when daughter Lynette married his son-in-love Shon Jenkins, and again when son John married his daughter-in-love Shawn Marie Davis. Mark also became a first-time grandpa to his “borrowed” granddaughter, Jenna (Lee) Kim. In 1998, Mark retired from Phillips Petroleum where he had worked as a manager in Process Engineering, and later in Corporate Engineering. His retirement let him enjoy the arrival of granddaughters Amanda, Ashley, Abigail, and Anne Marie who were his pride and joy. After retirement he also traveled but was always eager to be “back home and in his own bed.” The last 12 years of Mark’s life were enriched by his “good ol’ hound dog” Sophie. Mark left this life with his wife, children and their spouses, and granddaughters gathered round his bed, and with faithful Sophie’s head under his hand. Mark was preceded in death by his mother and father, Mazie and Jeff Bailey; sisters Catherine, Doris, Oleta and Betty; and brothers, Arnold, Travis, and Joe; and one daughter Mary Lyneese Bailey. He is survived by his wife of 58 years Rachel Bailey; daughter Lynette (Shon) Jenkins, son John (Shawn Marie) Bailey, daughter Kristie Bailey; granddaughters Amanda, Ashley, Abigail, and Anne Marie; sister Corrine Maum; brother David Bailey; “borrowed” granddaughter Jenna (Ki) Kim and “borrowed” great grandson Kaleb Kim, as well as numerous other family members. He will always be remembered and loved. But most of all, he will be missed. Mark’s family will receive friends at the Davis Family Funeral Home and Crematory – Walker Brown Chapel, 918-333-7665, 4201 Nowata Rd, Bartlesville, on Sunday, from 3-5 p.m. Visitation will also be held on Sunday from 12-5. Funeral services will be held 10 a.m. on Monday, at the Spirit Church, with Dr. Darryl Wootton officiating. Interment will follow in the Dewey Cemetery. Services are under the direction of Carter Davis and the Davis Family Funeral Home and Crematory – Walker Brown Chapel. Online condolences and remembrances may be shared at www.DavisFamilyFuneralHome.com.

Mark Bailey, 82, of Bartlesville passed away in his home on Aug. 24, 2020, after a hard-fought battle with leukemia. Mark was born to Jeff and Mazie Bailey on March 28, 1938, in Haynesville, LA, as one of 10 children. Like many rural families... View Obituary & Service Information

The family of Dunn "Mark" Marcus Bailey created this Life Tributes page to make it easy to share your memories.

Mark Bailey, 82, of Bartlesville passed away in his home on Aug....

Send flowers to the Bailey family.