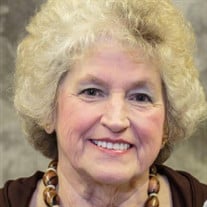 Earline L. Brumley, 78, of Bartlesville, died Thursday in Owasso. She loved life, shopping, travelling and spending time with her favorite people, most of all her family. Earline was born the daughter of Lawrence and Donna Louise (Spurgeon) Van Atta on July 15, 1943, in Stillwater, OK. She was raised in Dewey, graduating from Dewey High School in 1961. For the next six decades, she kept up and lunched with many of her childhood friends. Earline never ever forgot her friends – she was sociable, attentive and loyal, just like the elephants she collected over the years. Earline married Wyman Dale Brumley on June 24, 1961, and although this union ended in divorce, three beautiful children were born and Earline enjoyed being a stay-at-home mom while they were young. She cherished the time she had with them in Missouri and Kansas and they were her pride and joy. Once the kids were older, she went back to school and graduated from Butler County Community College with her RN associate’s degree in Nursing, and then earned her BSN from Oklahoma Wesleyan in Bartlesville. She went on to work at OSU Medical Center in Tulsa from 1985 to 2010 before finally retiring from that job. Earline’s tenacity and hardworking values helped her fulfill her life’s calling. Earline enjoyed a 30-year friendship with life partner Howard Baker. Earline was a loving grandmother who attended every activity her grandkids participated in. She enjoyed family cookouts and trips to visit the grandkids who lived further away. Her passion in life was shopping - Earline could spend countless hours looking around, thinking mostly of others. Oftentimes, she would buy gifts that put a smile on her beautiful face, just thinking of the smiles she would spread. Earline was active in many community organizations including Oklahoma Home and Community Education (OHCE) which partnered with OSU Extension Service, the Red Hats ladies’ society, and the Washington County Cattlewomen’s Association. She was a busy bee and hardly sat still except to visit with others. In her free time, she enjoyed traveling - taking cruises, particularly to Alaska, and going on road trips, especially to Branson, oftentimes with friends and family, and always with a smile. Earline is survived by her daughter Shelly Dianne Reid, nine grandchildren and 20 great grandchildren, as well as a host of other family and friends. She is preceded in death by her parents, two sons Wendell Allen Brumley and Michael Dale Brumley, grandson Christopher Michel Brumley, and two brothers Dewayne VanAtta and Jack VanAtta. Visitation will be held on Thursday from 10-8 at the Davis Family Funeral Home & Crematory – Walker Brown Chapel, 918-333-7665, 4201 Nowata Rd, Bartlesville. Services will be held 10 a.m. on Friday, at the Eastern Heights Baptist Church. Interment will follow in the Memorial Park Cemetery. Services are under the direction of Carter Davis and the Davis Family Funeral Home & Crematory – Walker Brown Chapel. Online condolences and remembrances may be shared at www.DavisFamilyFuneralHome.com.

Earline L. Brumley, 78, of Bartlesville, died Thursday in Owasso. She loved life, shopping, travelling and spending time with her favorite people, most of all her family. Earline was born the daughter of Lawrence and Donna Louise (Spurgeon)... View Obituary & Service Information

The family of Earline L Brumley created this Life Tributes page to make it easy to share your memories.

Send flowers to the Brumley family.