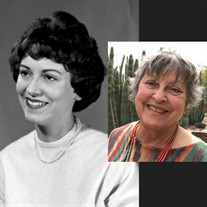 Edie Jane Atkinson Shank Rodman, 79, passed away Monday, March 16, 2020, in Bartlesville, Oklahoma, from complications of Alzheimer’s disease and ovarian cancer. Edie was born on January 30, 1941, and raised in Hartford City, Indiana, by her beloved parents Warren and Edith Atkinson. She married G. Deane Shank whom she met in church choir summer camp, and together (and after their divorce) they raised two cherished daughters Vanessa Anne Shank Drummond and Michaela Dawn Shank. Edie later married the love of her life, M. Neill Rodman in April of 1984. Edie had an adventurous soul. She graduated from Hartford City High School, then earned a BA in Music from DePauw University in 1962. She briefly taught music in rural Maryland schools, but moved on to eclectic jobs such as early computer programmer, library bookmobile lady, therapist, and secretary. Later, she proudly earned her Master of Divinity from the Pacific School of Religion. She was ordained, surrounded by friends, at her home church, Arlington Community Church in Kensington, CA, in June of 1983. Afterward, she served in numerous ministerial positions, including interim positions at St. John United Church of Christ in Woodland, CA; First Congregational UCC in Sonoma, CA; Peace Church of Oakland (one of the first GLB churches in the country); and her home church, Arlington Community Church. Her final calling was as Assistant Pastor at Hillcrest UCC in Pleasant Hill, CA, where she and Neill married in the beautiful courtyard. Edie relished life, and her favorite phrase to the end of her days was, “It’s more fun to have fun!” She loved music and sang alto loudly and proudly her whole life with both church and other choirs, including the Contare choir with whom she toured Russia. She was an extreme cat lady, and left a legacy of happy kitties behind, including Gracie, Poppy, Carl, Thomas, Roberta, Snowfoot, Mandy, Jesse, and many others. She adored RV traveling and had looked forward to many years on the road with Neill, before he died, much too young. She was a traveler, book fiend, saguaro cactus and sunset lover, minister, nacho and margarita connoisseur, knitter, gardener, politics arguer, and friend to many. Although Edie’s last years were clouded by Alzheimer’s disease, her family was grateful to have time and travel together. She adored her grandchildren, and they had the opportunity to know her better after she moved from California to Oklahoma. Her daughters had the wonderful chance to travel and spend time with Edie, including trips to her favorite childhood places in Indiana, her favorite beaches of Bermuda, and back to visit beloved friends in the San Francisco Bay Area. Edie is survived by a host of friends and family across the country, including her daughters, Vanessa Drummond (husband Ford) and Michaela Shank (partner David Nation), and her grandchildren, Virginia, F. Russell, and Margaret Drummond. She is also survived by her brother Mark Atkinson (wife Dallas), niece Emily Tsunemori (and family), nephew Ian Atkinson, and her beloved aunt Anne Beal (and family). She is also survived by step-sons Scott Rodman, Kent Rodman, and Darren Rodman (partner Carrie Brekke). Edie is predeceased by her parents Warren and Edith Atkinson, her husband M. Neill Rodman, and her stepson Gregg Rodman. We cannot thank enough the kind and diligent friends who helped Edie through these last few years, days and hours. We are so grateful to Leah Thompson, Green Country Village, Caregiver Services, Brookdale North, and Comforting Hands Hospice. It is hard to adequately express how much your caring, professionalism, and friendship has meant to our family. Due to the restrictions our country is currently facing, Edie’s memorials will be postponed. Remembrances will be gratefully accepted by Washington County SPCA (16620 State Hwy 123, Bartlesville, OK 74006), Bartlesville Education Promise (208 E Fourth St., Bartlesville, OK 74003), or Oklahoma Nature Conservancy (10425 South 82nd East Ave., Tulsa, OK 74133). Services are under the direction of Carter Davis and the Davis Family Funeral Home – Walker Brown Chapel. Online condolences and remembrances may be shared with Edie’s family at www.DavisFamilyFuneralHome.com.

The family of Edie Rodman created this Life Tributes page to make it easy to share your memories.

Send flowers to the Rodman family.