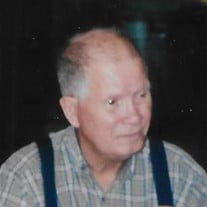 Edward “Eddie” Lee Gage Sr., 82, of Dewey, died Friday in Bartlesville. Eddie, as he was known, was born the son of Marion and Evelyn (Stout) Gage on June 3, 1937, in Hogshooter, OK. He grew up between here and California and back - the family settled in Jay, NE OK, and Eddie graduated high school in Noel, MO, not far from the Oklahoma state line. He entered the U.S. Army just after the Korean Conflict serving overseas in Korea and Germany. Once honorably discharged Eddie relocated to the Wichita, KS, area and after some time started his 29 year career with Cessna. Eddie found and quickly fell in love with Connie. They married on January 15, 1993 and made their home in Wichita. Once retired they moved to Minnesota to be closer to Connie’s family but after many years he decided the winters were too cold and they spent winters back home in Oklahoma. In 2012 they moved to their current, full-time home in Dewey. Together Eddie and Connie enjoyed fishing, camping and “hunting” at auctions looking for junk and treasures. Lately they enjoyed spending time at the Washington County Adult Center where Eddied enjoyed visiting with all of the other members. At home he had his four faithful companions and one cat that he dearly loved. Eddie is survived by his wife Connie of the home; five children, Edward Lee Gage Jr of Mulvane, KS, Russell Gage of Wichita, Sherri Gage of Clearwater, KS, Robyn Lynn Klaver of Grand Junction, CO, and Lisa Lynn Higbee of Wappapello, MO; two grandchildren Jenna Frasier and Garrett Gabe, both of Mulvane, and many great grandchildren. He is preceded in death by his parents, three brothers Charley, Jay and Marion, and three sisters Pauline, Louise and Dorothy. No formal services are planned. Arrangements are under the direction of Carter Davis and the Davis Family Funeral Home. Online condolences and remembrances may be shared at www.DavisFamilyFuneralHome.com.

The family of Edward "Eddie" Lee Gage Sr. created this Life Tributes page to make it easy to share your memories.

Send flowers to the Gage family.