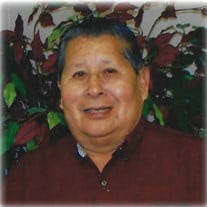 Edwin L. (Wahoo) Trottingwolf Jr., 81, died Monday. He departed this life from Bartlesville, where he was born and where he and his wife Kay were blessed with 61 years of marriage and many generations of family. A full-blood Cherokee, Wahoo was born April 19, 1938, in rural Bartlesville in Washington County, OK. He is the son of Edwin L. Sr. and Florence “Rachel” (Scullawl) Trottingwolf. Wahoo was raised and completed his education in Ochelata, graduating in 1956. He was employed with Reda Pump, MGM Metal Works, and then became a self-employed sign writer. He loved the Lord and served as pastor of First Baptist Church in Dearing, Kansas, for 10 years. As a young athlete, Wahoo met the love of his life Kay while playing ball one day at the Ochelata baseball field. They were united in marriage on Feb. 15, 1958, just after Valentine’s Day, and made their home in Bartlesville. Their union was blessed with five children. Wahoo had many passions in life. Apart from his family and his faith, he was blessed with God-given talent that grew into a lifelong love for music and singing. Early on, he was part of a singing group Gospel Messengers with his sisters. Later, Wahoo and his children sang together in harmony as the Trottingwolf Singers and every summer they spent two weeks singing all over the Midwest. He also enjoyed trains, particularly model trains, and history. He was very competitive playing ball and golf, and he played to win. Wahoo loved his family and grandchildren attending their many sporting activities to cheer them on. Survivors include his wife of the home Kay Yvonne (Mann) Trottingwolf; four daughters, Karen Anderson and husband William, Kathryn Morgan and husband Jody, Kim Osborne and husband Don, Kerri Evans and husband Brian, all of Bartlesville; one son Edwin L. “Eddie” Trottingwolf III and wife Leanne of Woodward, OK; 10 grandchildren, Waine Marsh and wife Sarah, Alicia Dobbs, Kayla Marsh, J.C. Trottingwolf, Cherokee Trottingwolf, Trey Osborne, James Osborne, Aston Gabriel Osborne, Kendal Westfall and husband Joshua, and Amber Gouveia; 13 great-grandchildren; two great-great-grandchildren; two sisters, Linda Joe (Trottingwolf) Leach, Susan Elaine (Trottingwolf) Hair and husband David; brother-in-law Ron Ford; sister-in-law Janice Trottingwolf, special niece Connie Grogg, nephews Zachary and Chance Grogg and a host of family and friends. He was preceded in death by his parents, one brother Dee Wayne (Wink) Trottingwolf; two sisters, Claranell Trottingwolf and Polly Sue (Trottingwolf) Ford, grandson Cody Gouveia and brother-in-law Robert Leach. Wahoo’s family will receive friends at the Davis Family Funeral Home – Dewey Chapel, 918-534-3030, 113 S. Osage (Hwy. 75), Dewey, on Wednesday, from 6-8 p.m. Visitation will also be held on Wednesday from 12-8 and Thursday 9-12. Special thanks to Comforting Hands Hospice. Funeral services will be held 2 p.m. on Thursday, at the First Baptist Church of Dewey. Interment will follow in the Matoaka Cemetery. Services are under the direction of the Davis Family Funeral Home – Dewey Chapel. Online condolences and remembrances may be shared at www.DavisFamilyFuneralHome.com.

Edwin L. (Wahoo) Trottingwolf Jr., 81, died Monday. He departed this life from Bartlesville, where he was born and where he and his wife Kay were blessed with 61 years of marriage and many generations of family. A full-blood Cherokee, Wahoo... View Obituary & Service Information

The family of Edwin Trottingwolf created this Life Tributes page to make it easy to share your memories.

Send flowers to the Trottingwolf family.