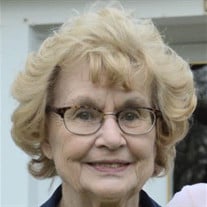 Elizabeth Dizmang passed away Wednesday, December 21, 2016 surrounded by her loving family. A Rosary will be held at 7:00 p.m. Monday, December 26, 2016 in the Walker-Brown Funeral Home Chapel. A Mass will take place at 2:00 p.m. Tuesday, December 27, 2016 at St. James Catholic Church with Father Archie Fernandez officiating. Interment will be in the White Rose Cemetery. Elizabeth Ann Maas was born February 2, 1930 in Kansas City, KS to Harry A. and Mary A. Maas. She married Gene Dizmang on October 22, 1949 in Kansas City, KS at St. Peters Catholic Cathedral while both were working for Phillips PetroleumCompany. Elizabeth was an enterprising, adventurous and generous soul. She played saxophone in high school and graduated from St. Aloysius All Girls School in Kansas City, MO. After marriage, Gene and Elizabeth moved to Bartlesville and started a family. Elizabeth began to acquire her business acumen by working at the Post Office and a bank. She later owned and operated Dizmang’s Bookland and the Nipa Hut furniture store, both successful downtown businesses. Elizabeth did all this while raising five children, becoming an avid bridge player, and growing in her faith at St. John Catholic Church. After retiring, her adventurous side emerged. She would try anything - from riding horses to traveling to exotic places. Not only did she walk the Wall of China, but also explored the Holy Land and the Pyramids. She went to the Philippines, traveled up the Pagsanjah River by canoe, and explored the mountains of Bagio. She and Gene enjoyed numerous cruises exploring Europe, Asia, South America, Alaska, the Caribbean and Panama Canal. They also traveled extensively at home, visiting numerous National Parks. Her philanthropy included generous contributions to her church and local charitable organizations. Elizabeth is survived by three sons; Gerald Dizmang and wife Dorothy of Bartlesville, Chris Dizmang and wife Debbie of Bartlesville, Paul Dizmang and wife Brooke of Springfield, MO and two daughters; Diana Kocheran and husband Gary of Bartlesville, and Mary Grove and husband Jerry of Bartlesville. She was blessed with eleven grandchildren and ten great grandchildren. Elizabeth is also survived by two sisters, Rose Svoboda and Rita Schwartz of the Kansas City, KS area. Elizabeth was preceded in death by her husband, Gene Dizmang, her parents, two brothers and one sister. Arrangements are under the direction of Walker-Brown Funeral Home. The family suggests memorials to ‘Catholic Charities’, in care of St. James Catholic Church, 5500 Douglas Lane, Bartlesville, OK 74006.

Elizabeth Dizmang passed away Wednesday, December 21, 2016 surrounded by her loving family. A Rosary will be held at 7:00 p.m. Monday, December 26, 2016 in the Walker-Brown Funeral Home Chapel. A Mass will take place at 2:00 p.m. Tuesday, December... View Obituary & Service Information

The family of Elizabeth Dizmang created this Life Tributes page to make it easy to share your memories.

Send flowers to the Dizmang family.