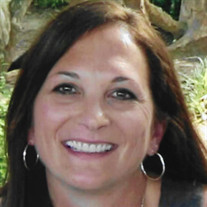 Elizabeth Seana Stoia, 52, of Bartlesville, passed away Aug. 14, 2019, after a five-year battle with frontotemporal degeneration (FTD), a rare form of dementia. She passed at her home in Bartlesville surrounded by her loving family. Elizabeth was born Sept. 18, 1966, in Bartlesville to George Samuel and Marjorie Kathryn (Frank) Stoia. Few knew Elizabeth by her actual name. To most, she was known as “Tooter” — a nickname given to her as a child by her beloved dad. She received her education in the Bartlesville Public Schools, graduating from Bartlesville High School in 1984. A lifelong athlete, Tooter was a standout softball and basketball player in high school, eventually winning two state championships in softball, one at Sooner High in 1980 and another at Bartlesville High in 1982. She also played competitively for Blazers Softball Team. She was a natural talent at any sport she participated in and continued to show her athletic prowess throughout her life. After high school, Tooter attended the University of Oklahoma where she was on the softball team on a full scholarship as a four-year letterman and three-year starter at shortstop and second base. She received her degree in communication in 1988. She parlayed her skills and education into a long and successful career, culminating in 18 years of service working for AT&T as Director of Marketing. Her career gave her the opportunity to move around the country to places including Kansas City, Dallas and San Antonio, and her adventurous spirit sent her on exciting trips to places like Italy with her older sister Annie and their mother. However, she loved nothing more than spending time in her two favorite places: New York City and Norman, Oklahoma cheering on her Yankees and Sooners. Those that knew her well, whether they knew her as Liz, Stoia, Tooter, or Elizabeth, knew her to be fun, energetic, sharp and the life of the party. She was effortlessly cool and could always be counted on for a good time. For her nieces and nephews, she was the ultimate cool aunt — a mix between the warmth of a mother and the confidence of a friend. Tooter is survived by her mother Marjorie “Kitty” Stoia of Bartlesville and her four siblings: sister Mary Kay Van Tuyl and husband Joe of Stroud along with nieces and nephews Katie & Kevin McIntyre, Laura & Dana Collins, Jennifer Van Tuyl, Joseph Van Tuyl, great nieces Molly and Maggie McIntyre, Julia Collins and great nephew Luke Collins; sister Linda and husband Mark Lepak of Claremore, nieces and nephews Sarah Lepak, Billy Lepak & wife Jenna, Ben Lepak & wife Sarah, Bobby Lepak & wife Paige, Brian Lepak & wife Colleen, great nieces and nephews Will, Cate, Lucy, Emma, Livie, Violet, Teddy, Thomas and Penny; sister Ann Henderson and husband Robert of Brighton, CO; and brother Sam Stoia and wife Trish of Tulsa, and nieces and nephews Seana, George III, Nick and Maddie. Elizabeth was preceded in death by her father George S. Stoia, maternal grandparents Roy and Marjorie Frank, and paternal grandparents John and Seana Stoia. Visitation will be held Friday from12 to 5 p.m. at the Davis Family Funeral Home – Walker Brown Chapel, 918-333-7665, 4201 Nowata Rd, Bartlesville. A rosary will be said on Friday at 7pm, at St John Catholic Church Before the Latin Gate. Funeral mass will be held Saturday at 11am also at St John Catholic Church Before the Latin Gate. Interment will follow in the Memorial Park Cemetery. In lieu of flowers, please consider donating to a charity of your choice. Services are under the direction of Carter Davis and the Davis Family Funeral Home. Online condolences and remembrances may be shared with Elizabeth’s family at www.DavisFamilyFuneralHome.com.

Elizabeth Seana Stoia, 52, of Bartlesville, passed away Aug. 14, 2019, after a five-year battle with frontotemporal degeneration (FTD), a rare form of dementia. She passed at her home in Bartlesville surrounded by her loving family. Elizabeth... View Obituary & Service Information

The family of Elizabeth "Tooter" Seana Stoia created this Life Tributes page to make it easy to share your memories.

Send flowers to the Stoia family.