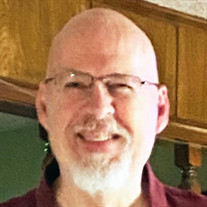 Ellis “E.J.” John Robinson Jr. of Dewey died Saturday in Bartlesville. He was 69 and had faithfully served the Lord his Savior through his life, music, home church and children’s ministry. Ellis John - or E.J. as he was known - was born the son of Ellis John Sr. and Imo Jean (Morgan) Robinson on December 16, 1951, in Mena, AR. He was raised in Mena and wasn’t aware until he started school that his given name wasn’t E.J. He developed his love for music at a young age and played the saxophone in the school band. Once he received cleft pallet correction surgery, he found his voice and enjoyed singing – using his voice to glorify God by singing in the church choir and performing special music selections. E.J. graduated from Mena High School with the Class of 1970 and went on to further his education at Ozark Bible College in Joplin, MO, and Dallas Bible College before moving to Bartlesville in 1975. E.J. started a long and happy career with Phillips Petroleum in 1978 but retired just short of his 40-year anniversary due to ill health. Early in his career E.J. met Miriam Lynn Hacker at Phillips, hit it off and united in marriage on June 12, 1982, making their home in Dewey where they raised five children. E.J. was active in the ministries of the church and served as deacon and elder, but his true passion was in working in the children’s ministry. E.J. passions revolved around his children and family. He enjoyed staying active and loved bowling and riding his bicycle. He enjoyed playing and watching sports especially if one of his children was on the team, and he faithfully coached and cheered them on along the way. No surprise too that his love for technology has been handed down to his kids - he brought it into the home and was always tinkering on something. Together, E.J. and Miriam loved to travel, taking several cruises, visiting national parks and calling on family. He was also known for his keen sense of humor and a mischievous knack for pulling pranks, but most of all he was a loving husband, father and grandfather to his family who will miss him dearly. E.J. is survived by his loving wife Miriam of 39 years; five children John (Mary) Robinson, Stephanie (Adam) Green, Jaime Robinson, Sarah (Justus) Schmidt and Seth Robinson and fiancé Brooke Thomason; granddaughter Abigail; brother Oscar (Ruby) Robinson; sister Emma (Rodney) Lott; mother Imo Jean Robinson and mother-in-law Caroline Wiltse. He is preceded in death by his father and three sisters, Velma Robinson, Armel Robinson and Audra Fairfax. E.J.’s family will receive friends at Tyro Christian Church, Tyro, KS, on Thursday, from 6-8 p.m. Funeral services will be held 10 a.m. on Friday at Tyro Christian Church. Services are under the direction of Carter Davis and the Davis Family Funeral Home – Dewey Chapel. Online condolences and remembrances may be shared at www.DavisFamilyFuneralHome.com.

Ellis &#8220;E.J.&#8221; John Robinson Jr. of Dewey died Saturday in Bartlesville. He was 69 and had faithfully served the Lord his Savior through his life, music, home church and children&#8217;s ministry. Ellis John - or E.J. as he was... View Obituary & Service Information

The family of Ellis "E.J." John Robinson Jr. created this Life Tributes page to make it easy to share your memories.