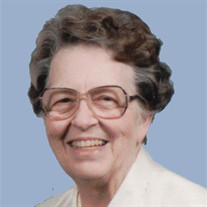 Emmilou Collins Edmonds Adams, formerly of Bartlesville, Oklahoma, passed away July 10, 2019, in Tulsa at the age of 97. She is survived by her husband, Charles, five children, Allan Edmonds (Ann) of Bloomington, Indiana; Don Edmonds (Susan) of Carbondale, Colorado; Stephen Edmonds (Robin) of Austin, Texas; Ron Edmonds (Kathryn) of Cordova, Tennessee; and Anna Swinney (David) of Plano, Texas; and a large extended family of grandchildren, great-grandchildren, nieces and nephews. She was predeceased by her first husband, Lee Edmonds; her father, Carlos Collins; her mother, Golda Emma Prince; and a sister, Carolyn Collins. She was born December 21, 1921, in Nauvoo, Illinois, and lived in Wisconsin, Missouri and Texas as a child. She graduated from Waco High School and North Texas State Teacher’s College (now the University of North Texas). She married Lee Edmonds of Waco, Texas, in 1945 in the closing days of World War II and relocated to Bartlesville, Oklahoma, where they raised their family. She was a long-time member of First Baptist Church of Bartlesville. Following Lee’s death in 1973, she was employed by Phillips Petroleum Company in the Research Department. She married Charles Adams in 1990 and subsequently relocated to Inverness Village in Tulsa, Oklahoma. She had a wonderful life and was a terrific mother, grandmother, great-grandmother, and mother-in-law. She was loved by many for her sweet spirit. Her interests included reading, church activities, travel, quilting, crafts and genealogy. She served as a leader for both Girl Scouts and Cub Scouts. A memorial service will be held at Inverness Village in Tulsa on Friday, August 2, 2019, at 2:00 pm in Founders Hall. Memorials may be directed to Inverness Village Benevolent Care Fund, 3800 W. 71st Street, Tulsa, OK 74132 or Trinity Baptist Church, 1703 W. 41st Street, Tulsa, OK 74107

The family of Emmilou Collins Edmonds Adams created this Life Tributes page to make it easy to share your memories.

Send flowers to the Adams family.