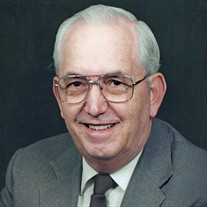 Ernest Eugene Hewitt Sr., age 87, of Bartlesville, OK, went home to be with the Lord on August 27, 2021. Ernie was born March 16,1934, in Estella, OK, to Wilmot Newton Hewitt and Dovie Royer Hewitt. During his childhood, his family worked many farms in the Nowata area. Ernie attended schools in Wann, Childers, Lenapah, and Nowata. After finishing the eighth grade and the death of his father, he left school to help with farm work. He later received his G.E.D. diploma in Bartlesville. He became a member of the Oklahoma Army National Guard Thunderbirds 45th Infantry Division, reaching the rank of Master Sergeant. He was very proud of his service as the mess sergeant. Ernie wed Nina Robinson on May 31, 1957 in Miami, OK. They were married until her death on March 20, 1997. They had two sons Randy Hank Hewitt and Ernest Eugene Hewitt, Jr. Ernie began his career as an electrician in 1961. He worked several years for Toby Schmoll Electric eventually becoming a master electrician and a member of IBEW Local 584 in Tulsa. He retired after many years with Holtz Electric so he could care for his wife during her battle with cancer. Ernie married Peggy Kemp, May 16, 1998. They made their home in Bartlesville, where Peggy provided extraordinary care to him during his 14-year battle with dementia. Ernie accepted Jesus Christ as his Savior in 1961 at Dewey First Assembly of God, and never looked back. He played his guitar during the song service, as well as serving as a board member, youth leader, and Sunday School Superintendent. He later became a member of Tuxedo Assembly of God in Bartlesville. Ernie loved time with all his family - fixing pancakes for his family on Saturday mornings, traveling to the mountains, camping, pitching horseshoes, playing cards, playing his guitar, and going to church. Ernie is survived by his wife Peggy Hewitt; two sons: Ernest Hewitt Jr. and wife Jan, Stevie Kemp and wife Linda; one daughter: Stephanie Birmingham and husband Steve; two granddaughters: Emily Branch and husband Wade, Heather McWilliams and husband Bobby; five grandsons: Tyler Hewitt, Jared Hewitt and wife Ashley, Levi Birmingham, Tovie Kemp, and Clarence Kemp; two great granddaughters: Talyn Branch, and Aria McWilliams; and one great grandson: Tripp Birmingham, and a host of nieces and nephews he loved dearly. He was preceded in death by his father and mother, his wife Nina Hewitt, his son Randy Hewitt; five brothers: Harold, Lloyd, Merle, Bill, and Cecil; and six sisters: Elva, Alta, Marie, Goldie, and Geraldine. Ernie’s family will receive friends at the Davis Family Funeral Home & Crematory – Walker Brown Chapel, 918-333-7665, 4201 Nowata Rd, Bartlesville, on Tuesday, Aug. 31, 2021, from 6-8 p.m. All day visitation will also be held on Tuesday from 10 a.m. - 8 p.m. Graveside services will be held at 10 a.m. Wednesday, Sept. 1, 2021, at the Nowata Memorial Park Cemetery with Rev. Gene Hewitt, Jr. officiating. Pallbearers will be Jared Hewitt, Bill Hewitt, Steve Birmingham, Melvin Robinson, Wade Branch and Johnie Johnson. Services are under the direction of Carter Davis and the Davis Family Funeral Home & Crematory – Walker Brown Chapel. Online condolences and remembrances may be shared at www.DavisFamilyFuneralHome.com.

Ernest Eugene Hewitt Sr., age 87, of Bartlesville, OK, went home to be with the Lord on August 27, 2021. Ernie was born March 16,1934, in Estella, OK, to Wilmot Newton Hewitt and Dovie Royer Hewitt. During his childhood, his family worked many... View Obituary & Service Information

The family of Ernest Eugene Hewitt created this Life Tributes page to make it easy to share your memories.

Send flowers to the Hewitt family.