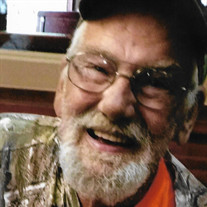 Ert Luther Gailey, 73, of Bartlesville, died Tuesday in Bartlesville. Ert’s passion in life was doing for others, he was active in everything and was an all-around super guy. Born the son of Vhoydle A and Helen O (Clark) Gailey on August 23, 1945 in Bartlesville, Ert grew up in the Ochelata area graduating from Ochelata High School in 1963. Through mutual friends Ert met and fell in love with Mary Shea, and they united in marriage on August 22, 1964, at Virginia Ave. Baptist Church in Bartlesville. Their first house was just two doors down from their current home that they built and moved into in 1974. They were never empty nesters – their home was always busy with family coming and going. Ert loved playing ball and he coached many of his girls’ fast pitch softball teams over the years. Sometimes switching hats to serve as umpire. After work he would even help maintain the ball fields they played on. Ert wore many hats over the years including substitute teacher, and worked at various jobs including National Zinc, Reda Pump, Latimer County Sheriff’s Office and most recently, as a supervisor at Dave Scott Concrete Contractors. Ert had many hobbies which he loved: hunting for ducks, deer and coons with best friend Dave. He liked to keep busy and was generous with his time, volunteering throughout his life with various organizations, such as the Red Cross. He was always ready to lend a helping hand and will be dearly missed. Ert is survived by his loving wife of 55 years Mary; and their three daughters, Tina L Greer and Bryan, Mary H. Watters, and JoLynda “Jodi” Lind; eight grandchildren: Ann Marie Harris Sullivan, Ert Levi Gailey, Dakota R. Gailey, Caleb Lind, Jacob Greer, Lauren Greer, Maggie Lind and Kristin Bond; and seven great grandchildren: Kailey Branscum, Hailey Wooten, Brityn Waller, Lucas Gailey, Chad Waller, Kambrie Gailey and Macklin Sullivan. Ert also is survived by one brother V.A. “Dink” Gailey and one sister Mary A. Gray and childhood-lifelong best friend David Scott. Ert was preceded in death by his granddaughter Kristina Jo Harris, sister Violet Street and brothers Glen Gailey, Ted Gailey, Bill Gailey and John Gailey. Ert’s family will receive friends at the Davis Family Funeral Home – Dewey Chapel, 918-534-3030, 113 S. Osage (Hwy. 75), Dewey, on Friday, August 23, from 6-8 p.m. Visitation will also be held on Friday from 10-8. Funeral services will be held 10 a.m. on Saturday, August 24, at the Davis Family Funeral Home - Dewey Chapel, with Rev. Kevin Baker officiating. Services are under the direction of Carter Davis and the Davis Family Funeral Home – Dewey Chapel. Online condolences and remembrances may be shared at www.DavisFamilyFuneralHome.com.

Ert Luther Gailey, 73, of Bartlesville, died Tuesday in Bartlesville. Ert&#8217;s passion in life was doing for others, he was active in everything and was an all-around super guy. Born the son of Vhoydle A and Helen O (Clark) Gailey on August... View Obituary & Service Information

The family of Ert Luther Gailey created this Life Tributes page to make it easy to share your memories.

Send flowers to the Gailey family.