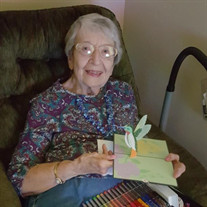 Esther Phelan, 93, longtime Bartlesville resident and devoted community volunteer, died Saturday in Bartlesville. Esther was born the daughter of Elmer Gilbert and Iva Jane (Smith) Ashcraft on Aug. 10, 1926, at home in St. Paul, KS. She was raised on the family farm and remembered fondly riding her horse to school. After her schooling she went to work at Mercy Hospital in Parsons, KS. During this time, she felt the Lord calling her to join the Catholic Church. Although they grew up in the same small town, Esther and her future husband, Wilbur, got to know each other during carpool trips between St. Paul and Parsons. They united in marriage on Aug. 20, 1951, in Parsons and made their home in Bartlesville. Esther soon realized her true calling in life was to serve others - beginning with her family, volunteering in her children’s many activities from Little League and the Kiddie Park to the College High band boosters and many more. Once the kids were older, Esther went to work for Phillips Petroleum Co. for many years before retiring with Wilbur in 1986. She enjoyed volunteering and serving others in the community through the church and other organizations including Meals on Wheels (25 years), Home Bound Ministries (20 years), and Concern (20 years). Both Esther and Wilbur were recognized by the Knights of Columbus with an Award of Appreciation for their countless hours of service. After Wilbur’s death, she continued volunteering with Meals on Wheels and Home Bound Ministries until stopped by failing health in 2007. Esther and Wilbur also enjoyed traveling to visit their seven grown children who had spread out from coast-to-coast, trying to visit their homes every few years. Together Esther and Wilbur worked in their garden picking tomatoes and blackberries. Once a month, Esther enjoyed her “As You Like It” meetings with friends from the church. Most recently she kept busy with coloring intricate pictures, solving jigsaw puzzles and visiting with friends. Esther was selfless in her service to others and will be remembered for her many acts of kindness. Esther is survived by her seven children, John Phelan and Cathy of Atlanta, Jim Phelan and Lisa of San Francisco, Mike Phelan of Houston, Steve Phelan and Jenny of Kansas City, Patrick Phelan of Palm Springs, Juanita Phelan of Stillwater, and Jane Ramey and Joe of Dewey; five grandchildren, Sara Ramey Richardson, Joey Ramey, Ben West, Kayla Stierwalt, Keith Stierwalt, and two great grandchildren, Zakary Ramey and Ramona West. She is preceded in death by her parents, husband Wilbur in 2003, grand daughter Mary Jane Ramey, brother Kenneth Ashcraft, and sister Leola Mae Ramsey. Visitation will be held Wed. from 10 am to 8 pm and Thur. 9 am to 12 pm at the Davis Family Funeral Home – Walker Brown Chapel, 918-333-7665, 4201 Nowata Rd, Bartlesville. In lieu of flowers memorials may be made to the St. John Catholic School. A rosary will be said on Wed. at 7 pm, in the Davis Family Funeral Home – Walker Brown Chapel. Funeral mass will be held Thur. 2 pm in the St. John Before the Latin Gate Catholic Church. Interment will follow in the Memorial Park Cemetery. Services are under the direction of Carter Davis and the Davis Family Funeral Home. Online condolences and remembrances may be shared at www.DavisFamilyFuneralHome.com.

The family of Esther Maxine Phelan created this Life Tributes page to make it easy to share your memories.

Send flowers to the Phelan family.