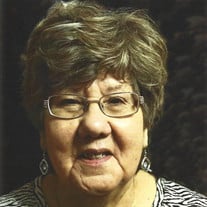 Eunice Leona Bonnett, 81, died Tuesday surrounded by her loving family in Bartlesville, after a recent brief illness. The longtime Bartlesville resident, and flawless mentor will be dearly missed, especially by her devoted husband and extended family. Eunice was born the daughter of Houston L. and Edith P. (Horner) Taylor on Sept. 20, 1939, at Claremore Indian Hospital. The family lived in Pruneville, just outside of Bartlesville. Along with four sisters and a brother, Eunice was raised and educated in Bartlesville, graduating with the College High Class of 1958. In her younger days Eunice loved to roller skate and visit with her friends. While still in school Eunice met Melvin Bonnett and they went together for many years before tying the love knot on May 6,1966. Her sister Rosie remembers them sitting in Melvin’s car outside her parents’ house, talking for hours on end. Eunice’s memorable jobs were at Peters Dept. Store, then SouthWestern Bell as an operator in 1959 before starting her long career with Phillips Petroleum Co. in 1960 - first as an operator, executive admin, chief operator and her last position in gas accounting. She loved every job she had and the many friendships made along the way. After 32 years of faithful service, she retired in 1992. Eunice was always busy, but everything stopped at 6:30 each evening for the Wheel of Fortune show. Her passions were reading, crossword puzzles, playing cards and Bingo. Eunice was a left-handed pitcher, and she and Melvin played on the Phillips co-ed softball team for years. They attended American Legion baseball games at the stadium, traveled extensively with the 66 Credit Union Gold Club and made several trips to Branson, MO, yearly. Eunice also bowled, with several perfect games and championship trophies. Eunice treasured her many nieces and nephews, and they knew she loved them dearly. She was active in their lives, travelling regularly to visit them. Melvin, when asked to describe her, used one word “Flawless”; her extended family agreed and added “Mentor” because Eunice always made time to listen and advise. Eunice is survived by her husband of 55 years Melvin Bonnett Jr.; brother Michael W. Taylor and Bonnie; sister Rosie Tucker; nine nieces and nephews, Pamela, Charlie, Scott, Jeff, Kenny, Jessica, Bruce, Micah and BreAwna; 18 great nieces and nephews, Michael, Chasten, Ashlie, Corie, Haylie, Dalton, Taylor, Derek, Jenna, DeShawn, Quinton, Davon, Drayden, Arianna, Ariabella, Danielle, Brody and Alejandra; and seven great-great nieces and nephews, Griffin, Addison, Jackson, Grayson, Elizabeth, Noah and Harper. Eunice is preceded in death by her parents and three sisters Naomi Wright, Barbara “Boj” Matthews, and Patricia Morris. Eunice’s family will receive friends at the Davis Family Funeral Home & Crematory – Walker Brown Chapel, 918-333-7665, 4201 Nowata Rd, Bartlesville, on Friday, from 6-8 p.m. Visitation will also be held Friday from 11-8. Services are under the direction of Carter Davis and the Davis Family Funeral Home & Crematory – Walker Brown Chapel. Online condolences and remembrances may be shared at www.DavisFamilyFuneralHome.com.

Eunice Leona Bonnett, 81, died Tuesday surrounded by her loving family in Bartlesville, after a recent brief illness. The longtime Bartlesville resident, and flawless mentor will be dearly missed, especially by her devoted husband and extended... View Obituary & Service Information

The family of Eunice Leona Bonnett created this Life Tributes page to make it easy to share your memories.

Send flowers to the Bonnett family.