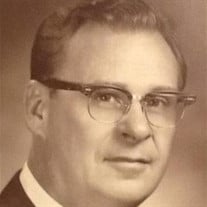 Floyd Eugene Hadsell, born December 14, 1925, passed into the arms of his precious Jesus on October 27, 2015. He was residing at Columbine Manor Care Center in Salida, CO following a serious illness in August. Floyd was one of seven children born to Preston and Leona Hadsell of Lima, Ohio. He is survived by sister Esther Fogt, of Cridersville, OH, and brother Lester Hadsell, of Lima, OH. Floyd attended Frankfort Bible College where he met Myrtie Riggins of Cambridge City, IN. He was ordained as a minister and they married in 1948. Floyd and Myrtie then served as pastors for the Pilgrim Holiness and Wesleyan Church denominations until 1987. They served churches in Indiana, Missouri, Kansas, Nebraska, Colorado, Oklahoma and Arkansas. Floyd and Myrtie moved to Buena Vista, CO in 1987 where he worked as a carpenter. They moved to Bartlesville, OK in 1998 after Myrtie suffered a stroke. She died in December 2002. In 2004, Floyd married long-time friend, Bonnie Collins of Blackwell, OK. They lived in Bartlesville and in Blackwell. After a heart attack in December 2014, Floyd returned to his beloved mountains to live with his daughter, Loretta and husband Bill Bird, in the home he helped them remodel in 1998. Bonnie remains in Blackwell where she receives care from her family. Floyd and Myrtie were the parents of four children: Rev. David Hadsell (Joy Haltom) of Rogers, AR whose children are: Sabrina Hadsell, Shannon (Kevin) Miller, and Joshua (Leah) Hadsell. Loretta Bird (Bill Bird) of Salida, CO. Rev. Marion Hadsell (Judy Colaw) of Hopeton, OK whose children are: Bradlee (Kendall) Hadsell and Andrea (Steven) Nichols. Wesley Hadsell (Cynthia Otten) of Bartlesville, OK. Their children are Tyler Hadsell and Laurel (Anderson) Mehrle. Twelve great-grandchildren have also blessed the family. Floyd will be remembered by family and friends as a loving, kind man always willing to give to others through his ministry and carpentry skills. He was a prayer warrior. He loved to read his Bible and preach. He and Myrtie loved to have fun with the youth in their churches. He loved to laugh, he loved his collies and steam locomotives. He loved to play the piano and build wood projects in his shop. He loved to take family and friends on jeep tours (thrill rides!!) in the mountains. Most of all, Floyd loved his Creator. "Well done, thou good and faithful servant." Viewing and Visitation will be held at Walker Brown Funeral Home in Bartlesville, OK on Thurs. Nov. 5 at 5 PM. A time of Reflective Memories will be held at 6:30 - 7:30 PM. Floyd will be laid to rest at Dewey Cemetery in Dewey, OK with a private family service.

Floyd Eugene Hadsell, born December 14, 1925, passed into the arms of his precious Jesus on October 27, 2015. He was residing at Columbine Manor Care Center in Salida, CO following a serious illness in August. Floyd was one of seven children... View Obituary & Service Information

The family of Floyd Hadsell created this Life Tributes page to make it easy to share your memories.

Send flowers to the Hadsell family.