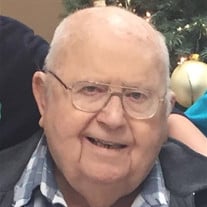 Floyd Thomas White, 86, died Monday in Copan. The longtime Copan resident was a son, brother, husband, father, grandfather, great grandfather and Army veteran. He was also a multi-talented man, “Honey Bee,” musician, storyteller and craftsman who operated Floyd’s Fiddle Shop in Dewey and liked to stay busy. Floyd was born the son of Robert Allen and Rosa Mae (Warden) White on April 11, 1932, in Celina, Tennessee, where he was raised and educated. Floyd enlisted in the U.S Army and served during the Korean Conflict with the 2nd Infantry Division in Korea. He was a decorated soldier and received three Oak Leaf Clusters for his distinguished service. While on leave Floyd was united in marriage on October 6, 1951, with Mary Evelyn Scott whom he had known since elementary school. They made their home at Morgan Field, Kentucky, until Floyd’s honorable discharge in 1953. In 1953, Floyd was headed to California for a new job. While on the way he stopped to visit his brother Raymond in Bartlesville and Floyd was immediately offered a job with Reda Pump. Mary joined him and in 1982 they moved to their current home in Copan. After 38 years of faithful service he retired in 1992. Floyd opened Floyd’s Fiddle Shop in Dewey in 1998 where he made guitars, fiddles, and mandolins, as well as repaired stringed instruments. Floyd’s passion in life was music. From a young age, he played many instruments and loved to sing. He enjoyed shade tree pickin’ and even had his own band called the Caney Bend Bluegrass Band comprised of him and the grandkids. Wherever Floyd was, you found Mary - they enjoyed each other and did everything together. Floyd put in his garden every year and filled his yard with fruit trees. Many people were able to enjoy his homegrown tomatoes and the various fruit wines he brewed. At one time he kept over 50 beehives and supplied residents with pure local honey. Floyd was known as “Honey Bee” by his coworkers. He was a loving grandfather who encouraged his grandchildren to love music from building to playing instruments, always entertaining them with one of his stories. Sometimes his stories took on life when he would draw windows on the mushrooms growing in the yard to illustrate there were tiny people living in them. His legacy will live on in the love he shared with his family and friends. Floyd is survived by his loving wife of 68 years Mary of the home; four children Waymond White and Jeanne of Copan, Jack Allen Jackson White and Belinda of Bartlesville, Gary Thomas White and Linda of Copan, and Peggy Yvonne Mogus and David of Bartlesville; one brother, Paul White of Celina, TN; two sisters, Pauline Melton and Dallas of Algood, TN, and Reba Dean Moore and Waymon of Celina; 10 grandchildren, Andrea Hunter and Scott, Aaron White and Marcy, Janelle Swartz and Nick, Amy (White) Prentice, Michele Jackson Green and Carl Crawford, Samuel White, Stacy Sprague, Mathew Mogus and Andreya, Mark Mogus and Heather, and Selina VanCleave and Joshua, and 19 great grandchildren. He is preceded in death by his parents, brother Raymond White, grandson Shannon Thomas White and great grandson mason hunter. Floyd’s family will receive friends at the Davis Family Funeral Home – Dewey Chapel, 918-534-3030, 113 S. Osage (Hwy. 75), Dewey, on Wednesday, Feb. 27, from 6-8 p.m. Visitation will also be held on Wednesday from 12-8 and Thursday 9-12. In lieu of flowers memorials may be made to the American Diabetes Association, 1-800-342-2383. Graveside services will be held 2 p.m. on Thursday, Feb. 28, at the Dewey Cemetery, with Evangelist Doyle Edwards officiating. Services are under the direction of Carter Davis and the Davis Family Funeral Home – Dewey Chapel. Online condolences and remembrances may be shared at www.DavisFamilyFuneralHome.com.

The family of Floyd Thomas White created this Life Tributes page to make it easy to share your memories.