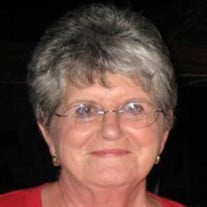 Frances Chaffee, 78, longtime Dewey resident, died Sunday in Dewey. Frances was born the daughter of Elston Franklin and Maggie Lorene (Herrington) Blenden on August 30, 1941, in Foraker, OK. The family moved to Cedarvale, KS, where she received her early education. In 1955, they moved to Dewey, OK, where she completed high school, graduating with the Class of 1959. Frances enjoyed playing the saxophone and was crowned Band Queen, wearing a dress the multitalented teen sewed herself. Frances was united in marriage with her high school sweetheart Bob Chaffee on July 23, 1960. Together, they brought four beautiful children into this world and into their lives. Frances enjoyed working; first with the Washington County Treasurer’s office, then with Mark Roberts Auto Group (which became Bartlesville Honda), and part-time with K-Mart. She enjoyed the many friendships she made with her co-workers and customers through the years. She was also an active church member throughout her adult life. She served as a leader in the youth group at First United Methodist of Dewey for many years before she started attending Rose Hill Baptist Church in Dewey. It was there Bro. Ralph baptized her. She knew from a young age that Jesus was her Lord and Savior, but she wanted to make that profession of faith public. In 2012, Frances joined her friends and became a member of First Baptist Church of Dewey. Frances loved blessing others with her creative gifts, such as cooking, baking, decorating cakes, sewing and crocheting. She made baby afghans for her grandchildren. Country music is what she liked listening to, especially George Strait and Elvis Presley. She also enjoyed camping with her family, two-stepping and square dancing at different times through her life. She was a dedicated mom and grandma. When the kids were young, she was active in the Girl Scouts as a leader, and she always attended every band concert and ballgame. When the grandkids were born, Frances traveled throughout the country to visit her precious babies including to Hawaii, Colorado and Virginia. She made frequent trips to her son Bobby’s house to spend Saturdays with his children while Bobby and his wife, Kerri, attended the OU games. Frances also made the yearly trips to Dallas with them for the Red River Rivalry. She loved her family deeply and will be dearly missed. Frances is survived by her four children, Lisa Lippert and Troy of Claremore, Viki Hanke and Terry of Newport News, VA, Bobby Chaffee and Kerri of Oklahoma City, and Gena Hobbs and Nick of Hampton, VA; fiancé Buster Seaver; two brothers, Samuel Blenden and Charlotte, and Gary Blenden and Marcia; one sister, Joyce Kelling Cercone and George; 10 grandchildren, Erica Lippert, Mathew Burnett, Meagan Novak, Benjamin Burnett, Taryn Chaffee, Averi Chaffee, Harper Chaffee, Riley Hobbs, Brooks Hobbs, Keiralise Hobbs, Jessica Hanke Samsing, and Samantha Hanke Mills; 8 great grandchildren with a baby girl expected to arrive in early March; and a host of other family and friends. She is preceded in death by her parents and her beloved friend, George Galbreath. The family wants to express heartfelt thanks to Beth Brewer and the staff of Forrest Manor, East Side and to Comforting Hands Hospice for the countless hours and acts of kindness afforded her. Services will be held 1 p.m. on Friday, January 3, at the First Baptist Church of Dewey, with Pastor Mark Wright officiating. Services are under the direction of Carter Davis and the Davis Family Funeral Home – Dewey Chapel. Online condolences and remembrances may be shared at www.DavisFamilyFuneralHome.com.

The family of Frances Chaffee created this Life Tributes page to make it easy to share your memories.

Send flowers to the Chaffee family.