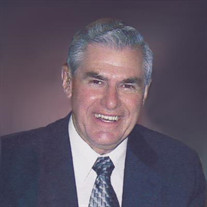 Frank Carlburg passed away Friday, October 2, 2015. The family will be receiving friends from 6-8 p.m. Tuesday, October 6, 2015 at the Walker-Brown Funeral Home. A graveside service will be held at 11:00 a.m. Wednesday, October 7, 2015 at Memorial Park Cemetery with Pastor James Biesiadecki officiating. Arrangements are under the direction of Walker-Brown Funeral Home. Frank Harry Carlburg, Jr. was born October 8, 1936 in Chanute, KS to Frank Harry and Lois Mae (McGinnis) Carlburg. He married Ella Marie Madill on September 1, 1956. In his career, Frank was employed by Boeing and Phillips Petroleum Company, primarily working with computer systems. He retired from Boeing Wichita as a Quality Systems Manager in 1998 and he and Marie relocated to Bartlesville, OK. Frank had the heart of a servant: in the church as a beloved Sunday School teacher and Deacon, in the community in both civic and lay ministry capacities, and globally as an evangelist and minister. He traveled to several countries including Honduras, Nicaragua and Mexico with B.M.D.M.I., serving alongside the medical and dental teams, communicating without language by simply serving where people needed him and touching hearts around the world. Frank never met a stranger and never turned his back on a person in need. Frank is survived by his wife Marie Carlburg of the family home and four daughters; Nancy and husband Rod Schellack of Warsaw, Poland; Marla and husband Doug Hodges of Bartlesville; Lisa Scott and fiancé Bill Helm of Collinsville; and Melanie Carlburg of Claremore. He was blessed with seven grandchildren and eight great grandchildren. He is also survived by brothers Chris (Florence) Carlburg of Wichita, KS; Richard "Dick" (Jayne) Carlburg of Gilbert, AZ; stepbrothers Bill (Loleta) Haskins of Bella Vista, AR; Bob (Donna) Haskins of Lebanon, OH; stepsister Joyce Gibson of Chanute, KS; numerous nieces, nephews and many friends. Frank was preceded in death by his parents. There will be a memorial fund established in Frank’s honor with B.M.D.M.I., 11 Plaza Drive, Hattiesburg, MS 39402.

The family of Frank Carlburg created this Life Tributes page to make it easy to share your memories.

Send flowers to the Carlburg family.