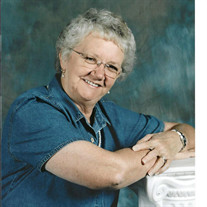 Frankie Louise (Harris) DeLapp, 77, of rural Bartlesville, died on Wednesday evening. Frankie was born the daughter of Joe and Vivian (Drake) Harris on October 14, 1944 and was raised in the Ramona area where she attended school and played basketball for the Ramona Wolves. Frankie graduated from Ramona High School in 1962. During those high school years, she met Gene DeLapp who she married on June 28, 1963. Frankie and Gene enjoyed 40-plus years of marriage until his death. Upon graduation, she was employed by Phillips Petroleum Company until she was married and relocated to Tahlequah where Gene attended college and she worked for KTLQ radio station selling advertising. Upon returning to Bartlesville, she again returned to work at Phillips until her children were born choosing to remain home with them until they were old enough to attend elementary school and sold Tupperware to countless numbers of people. Frankie for the third time went back to work at Phillips Petroleum Company as an Employment Analyst until she retired in 2002. Frankie was involved in the hiring and placement of temporary employees for the company and assisted numerous individuals in gaining employment often resulting in them becoming permanent employees. Hundreds of people have told the family that Franke hired them at Phillips and they are forever grateful for her. Following the death of their spouses, Frankie and Jerry Henshall married on March 17, 2006 in Bartlesville. They were married for almost 13 years until Jerry’s death in 2019. Frankie loved her family and loved the Lord being saved and baptized in her home church, First Baptist Ramona. Frankie was always there for her family including her large extended family of cousins, nephews and nieces. Frankie was an avid sports fan spending her pleasure time watching basketball, football and softball. Frankie was a member of the Order of the Eastern Star of Oklahoma, 0370, Ramona chapter, First Baptist Church of Ramona and the Oklahoma Cattleman’s Association. Frankie served as a director on the Washington County Farm Bureau board, the Bartlesville Area Crime Stoppers board and volunteered at Mary Martha Outreach Center and Ramona First Baptist Church fixing and serving food to the youth. Frankie is survived by her son Curtis DeLapp and wife Lee Anne (Cone) DeLapp; one daughter Kristi DeLapp and her husband Troy Calhoon; grandchildren Brandi DeLapp, Tanner and Clarissa DeLapp, Chandler DeLapp, Anna Kate DeLapp; a great granddaughter Briar Rose DeLapp; nephew and nieces and a host of extended family and friends. She is preceded in death by both of her husbands; her parents; one brother Ronald Joe Harris; one sister Patricia Ann (Harris) Woods and one nephew Ronnie Woods. In lieu of flowers memorial donations may be made to the Frankie DeLapp scholarship fund, 401 S. Dewey, Suite 226, Bartlesville, OK 74003. Visitation will be held from 12-5 p.m. on Saturday, November 6th and Sunday, November 7th. Frankie’s family will receive friends from 3-5 p.m. Sunday, November 7th at Davis Family Funeral Home & Crematory – Walker Brown Chapel at 4201 Nowata Road, Bartlesville, OK. Funeral services will be held 10 a.m., Monday, November 8th, at First Baptist Church of Ramona with Pastor Lynn Nikkel officiating. Interment will follow at the Ramona Cemetery. Services are under the direction of Carter Davis and Davis Family Funeral Home – Walker Brown Chapel. Online condolences and remembrances may be made at www.DavisFamilyFuneralHome.com

Frankie Louise (Harris) DeLapp, 77, of rural Bartlesville, died on Wednesday evening. Frankie was born the daughter of Joe and Vivian (Drake) Harris on October 14, 1944 and was raised in the Ramona area where she attended school and played basketball... View Obituary & Service Information

The family of Frankie Louise DeLapp created this Life Tributes page to make it easy to share your memories.

Send flowers to the DeLapp family.