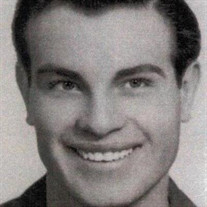 Fred G. (Freddie Gross) Roland, 83, died Wednesday, August 12, 2015 in Bartlesville, Oklahoma following a brief hospital stay. He leaves behind three daughters: Rachel Oaks of Bartlesville, Oklahoma; Suzanne Gibbens of Colorado and Sabrina Roland of Tulsa, Oklahoma and their extended families including 6 grandchildren: Zac Gibbens, Jeff Gibbens and Kyle Gibbens of Colorado; Jessica Sickman and Jordan Sickman of Tyler, Texas and Ariel Napier of Orlando, Florida; as well as 4 nieces and nephews and 1 grandson. Mr. Roland was preceded in death by his parents, Fletcher (Fred) Milton Roland and Della May (Doll) Roland; his former wife, Mary Frances Roland and his daughter, Angelique Sickman. Born and raised in Lindsay, Oklahoma, Fred developed a love of horses that stayed with him all of his life while raising his horse, Buck. He was also a 4 year letterman in football. After a walk on try out for Bud Wilkinson’s OU Sooners that didn’t pan out, he attended university in Colorado on a football scholarship until a back injury sustained in a car wreck cut his career short. After learning to walk again, he volunteered for service in the United States Navy and was honorably discharged in 1951 from the Naval Training Center in San Diego, California having obtained the rank of Seaman Apprentice. He obtained his Real Estate Broker’s License and received EEG/EKG Technician Training in Galveston, Texas later working as the EEG/EKG technician at Central State Hospital (now Griffin Memorial Hospital) in Norman, Oklahoma until he retired. Fred used his knowledge of athletics to help mentor his daughters’ soft ball and track teams. He followed their band concerts, cheer leading events and most notably arrived like a knight in shining armor to strike all of their Girl Scout troop’s camping tents during an Oklahoma tornado. He also enjoyed hunting, fishing, gardening, cooking and watching all sports, especially the horse racing Triple Crown and his beloved OU Sooners. He was a member of the Choctaw Native American Indian Tribe. A public Memorial Service will be held for Fred at The Light Church Fellowship, 1244 SE Washington Boulevard, Bartlesville, Oklahoma on Sunday, September 20, 2015 at 10:00 am under the direction of Pastors David and Rachel Oaks. A private burial will follow the service.

The family of Fred Roland created this Life Tributes page to make it easy to share your memories.

Send flowers to the Roland family.