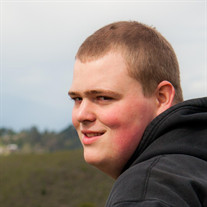 Garrett “Gentry” White, 28, of Bartlesville, died Sunday in Bartlesville. Garrett or Gentry as he was known was born the son of James Darrell White and Barbara (Fraser) Alexander on January 25, 1991, in St. Louis Park, Minnesota. He was raised in Minnesota until age 11 when his family moved to Bartlesville to be closer to more family. Garrett attended Bartlesville public schools, graduating from the Bartlesville High School in 2009. He went on to further his education by taking a course in Computer Technology at Tri County Tech. He decided to move to California and for the next two years lived with an aunt before returning to Bartlesville. Gentry enrolled at Tulsa Welding School and completed the welding program. He went on to work as a welder - a job he enjoyed until sustaining an injury that prevented him from continuing to weld. Recently he joined DSR in Bartlesville. Gentry was all about friends and family. He had a great sense of humor and made friends easily. Within 20 minutes of meeting a stranger they were already his good friend. Gentry was always ready to help a friend in need and was the go-to call when help was needed. Off and on he delivered pizza – it was a job he really enjoyed because of the many different people he came into contact with. Frequent customers, when ordering, would request that Gentry deliver their pizza because they wanted to see and talk to him. Most of all he loved his family, playing cards with the guys, and listening to music. He will be dearly missed. Gentry is survived by his mother Barbara Alexander and Bob of Bartlesville; brother Austin James White of Austin, TX; sister Jennifer Richardson and Frank of Rockwall, TX; nephew Charley Richardson; niece Brina Richardson; and a host of other family and friends. He is preceded in death by his father James Darrell White. Visitation will be from 9:00 a.m. - 8:00 p.m. Thursday. Funeral services will be held 10:30 a.m. on Friday, Feb.15, at the Davis Family Funeral Home – Walker Brown Chapel. Interment will follow in the Memorial Park Cemetery. Services are under the direction and care of Carter Davis and the Davis Family Funeral Home – Walker Brown Chapel. Online condolences and remembrances may be shared at www.DavisFamilyFuneralHome.com.

Garrett &#8220;Gentry&#8221; White, 28, of Bartlesville, died Sunday in Bartlesville. Garrett or Gentry as he was known was born the son of James Darrell White and Barbara (Fraser) Alexander on January 25, 1991, in St. Louis Park, Minnesota.... View Obituary & Service Information

The family of Garrett "Gentry" White created this Life Tributes page to make it easy to share your memories.