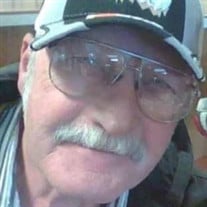 Gary Lee Alexander, 73, of Dewey, passed away on Wednesday, November 25, 2020, in Bartlesville. Gary was born September 29, 1947 in Dewey to Orace and Hazel (Miller) Alexander. He grew up on a farm in the area and graduated from Dewey High School. Gary shared memories of his childhood and enjoyed horsing around with his brothers. He served his country in the United States Army as a radio operator. His service included overseas duty and he received the National Defense Service Medal, the Armed Forces Expeditionary Medal, the Vietnam Campaign Medal and the Vietnam Service Medal. Gary married the love of his life, Betty Lue, on April 11, 1969. He and Betty enjoyed traveling to Branson together. He was a loving family man and was a great father to his children, Frankie, Allen, Bobby and Kelly. The family shares many memories of fishing and camping together at Keystone Lake. Gary was employed as a truck driver before his retirement. He was a member of Dewey VFW and the Aerie Eagles Lodge 610 in Bartlesville. A patriotic man, Gary enjoyed talking with his fellow veterans at the Copan Truck Stop. One of his favorite pastimes was playing Bingo. He is survived by his children, Kelly Little, Frankie Conditt and her husband Bobby D., Robert Dotson and his wife Pam, Allen Lee Dotson; and a brother, Jerry Ray Alexander and his wife Marlynn Sue; and grandchildren, Katy House and her husband Christopher, Logan Dotson, Nicholas Dancer, Johnathan Dancer, Anthony (Jamie) Garcia, Amanda (Kyle) Barcus, Jesse (Maegan) Dotson, Dalton (Ericka) Dotson, William Dotson, Crystal Alexander and husband Jason, Sarah Dotson, Rebecca Betterton, (20) great grandchildren, numerous nieces, nephews and many friends. In addition to his parents, Gary was preceded in death by his wife, Betty Lou Alexander; brothers, Larry and Ronald Orace Alexander; and sister, Mary Jane Gray. Casket Bearers include - Christopher House, Logan Dotson, Nicholas Dancer, Johnathan Dancer, Ronald Alexander and James Conditt. Gary’s family will receive friends at the Davis Family Funeral Home – Dewey Chapel, 918-534-3030, 113 S. Osage (Hwy. 75), Dewey, on Monday, November 30, from 6-8 p.m. Visitation will also be held on Monday from 10 a.m.-8 p.m. and Tuesday 10-12 p.m. Graveside services will be held 2 p.m. on Tuesday, December 1, at the Dewey Cemetery. Services are under the direction of Carter Davis and the Davis Family Funeral Home – Dewey Chapel. Online condolences and remembrances may be shared at www.DavisFamilyFuneralHome.com.

Gary Lee Alexander, 73, of Dewey, passed away on Wednesday, November 25, 2020, in Bartlesville. Gary was born September 29, 1947 in Dewey to Orace and Hazel (Miller) Alexander. He grew up on a farm in the area and graduated from Dewey High... View Obituary & Service Information

The family of Gary Lee Alexander created this Life Tributes page to make it easy to share your memories.

Gary Lee Alexander, 73, of Dewey, passed away on Wednesday, November...