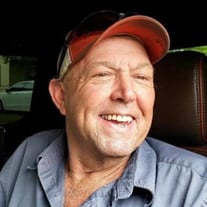 Gary Lynn Beshears, 58, of Bartlesville, died Thursday, June 17, 2021. Gary was born December 4, 1962, in Bartlesville to Jack J. and Georgia Mae (Geeding) Beshears. Gary attended Bartlesville Public Schools and graduated from Sooner High in 1981. He married Cheryl Griggs in December 1981 and they have remained close friends. Gary loved his family and enjoyed spending time with his grandchildren. Gary was a hardworking man. In 1986, he spent his time bulldozing for Ben Allen. He also worked pushing snow in the winter with his father and brother. He was a truck driver and spent many hours driving across the country. In 2008, he started working for Team Fishel as a corporate truck driver. He always made sure his truck was cleaned and waxed. It was also common for him to be brush hogging with his tractor. One of his favorite pastimes was sitting on the back porch talking with his family and having date night at Braum’s. He was a Baptist and talked about Jesus a lot, especially in the last few days of his life. Gary is survived by his mother Georgia; two daughters, Dana and LeRoy Penney, and Ashlee Beshears and Mark Moore; one son Dustin Beshears; a brother and sister-in-law, Joe and Ronda Beshears; a sister and brother-in-law, Lisa and David Bridges; four grandchildren, Aundrea Glenn, Maleia Lynn Beshears, Kambrea Moore and Daegon Moore. He is also survived by many nieces and nephews, Amber and Shawn Severs of Broken Arrow, Mandi and Dante Jones of California, Kaleigh and Andrew Dodson of Bartlesville, Tia and Paul Tucker of Okinawa, Japan, Case Beshears, Randy Burrows of Wann, Heather Kiser of Wann, Kara Lloyd of Delaware, Kristen Smith of Bartlesville, Kindra Gallegos of Bartlesville,; as well as great-nieces and great-nephews, Aubrey Dodson, Brooklyn Dodson, Sawyer Severs, Millie Jones, Collin Tucker and Zaire Jones; his close friends Tamra McDonald and Deedee Obrien; and a host of friends. In addition to his father, Gary was preceded in death by his father Jack J Beshears and his sister Kim Embrey. Gary’s family will receive friends at the Davis Family Funeral Home & Crematory – Walker Brown Chapel, 918-333-7665, 4201 Nowata Rd, Bartlesville, on Tuesday, June 22, from 6-8 p.m. Visitation will also be held on Tuesday from 12-8. Funeral services will be held 11 a.m. on Wednesday, June 23, at the Davis Family Funeral Home & Crematory – Walker Brown Chapel. Interment will follow at the White Rose Cemetery. Services are under the direction of Carter Davis and the Davis Family Funeral Home & Crematory – Walker Brown Chapel. Online condolences and remembrances may be shared at www.DavisFamilyFuneralHome.com.

The family of Gary Lynn Beshears created this Life Tributes page to make it easy to share your memories.

Send flowers to the Beshears family.