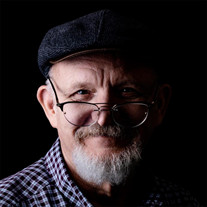 Gary Gene Gibson, age 72, passed away in the early hours of August 11, 2021, in Bartlesville, Oklahoma. Gary was born on December 12, 1948 to parents Fred and Willetta Gibson in Tulsa, Oklahoma. He moved with his family to Atlanta where he attended 2nd through 9th grades. The family returned to the area in 1964 settling in Bartlesville, OK. During this time he met the love of his life, Nancy Sas, whom he married on August 7, 1970. He and Nancy moved to Springfield, MO where he attended Evangel College graduating in 1971. It was during his time in college that he found the second love of his life...photography. This passion led him down a path that would ultimately lead him around the world using his talents to share the Gospel. They returned to Bartlesville in 1973 where they raised two children. During his career he worked as a photographer at Winston’s, as an artist in the graphics department at Phillips, as a missionary for the Assemblies of God, and finished up as the owner of his own graphic design business, Ampersand Graphics. While Gary was never officially retired he did profess to be “self-unemployed.” He spent his later years taking photos, making art and connecting with the community he so deeply loved. Gary is survived by his wife, Nancy; sister, Cecelia Harness; two children and their spouses, Jennifer and Travis Keener and Peter and Rebekah Gibson; and his grandchildren Anastasia, Hailey, Sadie, John, Virginia, Zoe and Jack. Gary’s family will receive friends at the Davis Family Funeral Home & Crematory – Walker Brown Chapel, 918-333-7665, 4201 Nowata Rd., Bartlesville, on Sunday, August 15, from 3-5 p.m. Visitation will also be held Sunday from noon to 5 p.m. A memorial service will be held at Spirit Church on Monday, August 16 at 2 p.m. Interment will follow in the Memorial Park Cemetery. Gary’s motto in life was to “pay it forward.” Many have been blessed to be on the receiving end of his generous heart. In the days and weeks to come, we ask that in lieu of flowers, let your heart be open to opportunities to do the same in your own lives.

Gary Gene Gibson, age 72, passed away in the early hours of August 11, 2021, in Bartlesville, Oklahoma. Gary was born on December 12, 1948 to parents Fred and Willetta Gibson in Tulsa, Oklahoma. He moved with his family to Atlanta where he... View Obituary & Service Information

The family of Gary Gene Gibson created this Life Tributes page to make it easy to share your memories.

Gary Gene Gibson, age 72, passed away in the early hours of August...

Send flowers to the Gibson family.