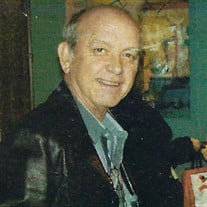 Gary Greenwood, 72, longtime Dewey resident, died Friday in Dewey. He will be dearly missed by his wife, children, siblings, grandkids, great grandkids and all who loved him. Gary was born the son of Edgar E. and Milldred (Millhouse) Greenwood on June 23, 1946, in Ramona, OK. He was raised and received his early education in Ramona before moving to Midwest City where he graduated high school in 1965. Soon after he entered the U.S. Army and served his commitment before being honorably discharged. While visiting his mother who worked at Marie’s Steakhouse, he noticed a young girl working at the same time and soon struck up a relationship with her. Gary united in marriage with Judy (Lowe) Powell on January 20, 1970, and cherished his new wife and her two small children Rhonda and Ronnie. They made their home in Bartlesville before moving to their current home in Dewey in1972. Soon after they were blessed with a baby girl Christel. Gary entered the HVAC trade and worked many years with Dan Crouch Cooling and Heating before opening Greenwood Heating and Air. In his younger days Gary and Judy would go out on the weekends dancing and having fun, sometimes taking special trips together while leaving the kids with grandma. Later they enjoyed fishing and camping with the family and cooking out. Gary loved his grandkids and installed a swimming pool in the back yard where he spent countless hours watching them swim while sitting on the deck. Just in the past year he was blessed with two new great grandbabies whom he loved dearly. Gary is survived by his loving wife of 49 years Judy; three children, Rhonda Livingston and Dusty Armstrong of Broken Arrow, Ronnie Powell Jr. of Ochelata, and Christel Crawford and Gordon of Ochelata; two brothers, Jack Greenwood and Donald Ray Pollett; two sisters Lois Pickering and Gene and Patty Harden; seven grandchildren, John Lee Livingston and Drake, Dustin Livingston and Machelle Shipp, Katie Cummins and Tommy, Kasey Cummins, Garrett Powell, Dakota Crawford and Jorden, and Lacee Crawford and Robert Hahn; and nine great grandchildren. He is preceded in death by his parents and sister June King. Services will be held 2 p.m. on Friday, June 14, at the Davis Family Funeral Home - Dewey Chapel, with Rev. Waymond White officiating. Interment will follow in the Dewey Cemetery. Services are under the direction of Carter Davis and the Davis Family Funeral Home – Dewey Chapel. Online condolences and remembrances may be shared at www.DavisFamilyFuneralHome.com.

Gary Greenwood, 72, longtime Dewey resident, died Friday in Dewey. He will be dearly missed by his wife, children, siblings, grandkids, great grandkids and all who loved him. Gary was born the son of Edgar E. and Milldred (Millhouse) Greenwood... View Obituary & Service Information

The family of Gary Greenwood created this Life Tributes page to make it easy to share your memories.

Send flowers to the Greenwood family.