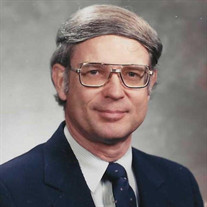 Gene Sturm, 79, longtime Bartlesville resident and former Vice-Mayor, died on Monday, March 2. Gene was born on May 4, 1940, the son of Paul and Evah Lois Sturm. After graduating from College High School in 1958, Gene continued his education at Oklahoma State University, graduating with degrees in both Chemistry and Mathematics. After working for Phillips Petroleum Company, he attended the University of Texas at Austin and received a Ph.D. in Physical Chemistry in 1969. He was employed by Bartlesville's Bureau of Mines, which later became NIPER (National Institute for Petroleum and Energy Research), BDM Oklahoma, and BDM Petroleum Technologies, until his retirement in 1998. Gene and Phyllis Murray were married on August 1, 1965 and raised their family in Bartlesville where he served three terms as Bartlesville City Commissioner in the 1980s and was elected Vice-Mayor in his last term. His professional affiliations included American Society for Mass Spectrometry, American Chemical Society, and American Society for Testing and Materials. He was a longtime member of First Christian Church, having served as chairman of the administrative board, deacon, elder, and Sunday School teacher for 25 years, in addition to having served on various church committees. He is survived by his wife Phyllis of the home; son Mike Sturm and wife Cindy of Edmond, son Mark Sturm and wife Stacy of Allen, Texas; four grandchildren Jacob, Joshua, Katie, and Luke; brother, the Reverend Dr. Richard Sturm of New York City; and sister Mary Helen Sturm of Ft. Lauderdale; numerous nieces, nephews, cousins, and good friends. He was preceded in death by his parents Paul and Evah Lois Sturm. Visitation will be held Sunday from 12-5 p.m. at Davis Family Funeral Home – Walker Brown Chapel, 918-333-7665, 4201 Nowata Rd, Bartlesville, OK. In lieu of flowers memorials may be made to the Alzheimer's Association, Oklahoma Chapter, 2448 E. 81st Street, Ste. 3000, Tulsa, OK 74137. The family wishes to thank the nurses and staff of Bartlesville Health and Rehab, Grace Hospice, and Green Country Village Lakeview, for their kindness and compassionate care. Private family services are under the direction of Carter Davis and the Davis Family Funeral Home – Walker Brown Chapel. Interment will be at Memorial Park Cemetery. Online condolences and remembrances may be shared at www.DavisFamilyFuneralHome.com.

Gene Sturm, 79, longtime Bartlesville resident and former Vice-Mayor, died on Monday, March 2. Gene was born on May 4, 1940, the son of Paul and Evah Lois Sturm. After graduating from College High School in 1958, Gene continued his education... View Obituary & Service Information

The family of Gene Paul Sturm created this Life Tributes page to make it easy to share your memories.

Send flowers to the Sturm family.