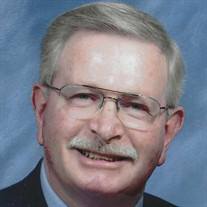 Brother Gerald Arwood Taylor (84), of the Bartlesville Masonic Lodge #284 and Akdar Shrine of Tulsa, laid down his working tools on July 13, 2021. Jerry, as he was familiarly known, was born in Detroit, Michigan, on February 24, 1937, and grew up in the downriver area. In October 1958, he married Donna Dunmyer. They were subsequently blessed with four children. The marriage later ended in divorce. He made a career he loved in construction as a member of the International Union of Operating Engineers, Local 324. Trained and certified to operate heavy machinery of all types, he especially loved and specialized in cranes. Sunday afternoon drives with the family consisted of pointing out buildings he had worked on. He retired March 1, 1998. In June of 1977, he married Marilyn (Truman) Phariss at Good Hope Lutheran Church in Garden City, Michigan. The couple (and Marilyn’s children) later became members of the church, and Jerry became actively involved as a member of the Church Council and Chair of the Property Committee. In his 40s, Jerry became dissatisfied with the fact that he had not graduated high school and set out to achieve his high school diploma. He enrolled in the Garden City Adult Education program. He was so determined to finish that he attended evening classes in his work clothes before going home at the end of the day. He received his diploma in June of 1981. As a Mason, Brother Taylor was raised in the Grand Lodge of Michigan, Garden City Builders #587, in May of 1977. After moving to Bartlesville (Marilyn’s hometown) in spring of 2003, he affiliated with the Bartlesville Masonic Lodge #284 in October of that year. He attained the level of Perpetual Member. In May of 2012, he became a member of the Akdar Shrine of Tulsa, where he enjoyed driving a van to transport children for medical treatment at Shriner’s Hospitals in St. Louis, Shreveport, Houston, and Galveston. His other interests included professional sports (his favorites were the Detroit Tigers and Lions); coaching youth baseball, softball, and football with the Garden City Youth Athletic Association (of which he served as commissioner for a time); playing golf; hunting deer; riding snowmobiles; and solving crossword puzzles. He was talented in gardening and home maintenance/improvement with an ability to build or remodel practically anything. He became well-known and sought out by Bartlesville locals for his plumbing know-how while working at Lowe’s. He was preceded in death by eldest son Robert, ex-wife Donna, brother Donald (as well as his wife, DaLee) and brother Robert (called Bobby), sister MaryLou (as well as her husband Robert Carey), and their parents. He is survived by his wife Marilyn Taylor, of Bartlesville, Oklahoma; children Scott Taylor (Gena) of New Port Richey, Florida, JeriLyn Pearson (Dean) of Coatesville, Pennsylvania, Angela Kresse (Steve) of League City, Texas, Greg Phariss of Bacliff, Texas, and Debra Taylor; grandchildren Joel Phariss, Connor Pearson, and Emma Pearson. In lieu of flowers, the family requests donations be made to the American Diabetes Association or Our Savior Lutheran Church. Visitation will be at 10 a.m. with services to be held at 11 a.m. Monday, July 19, 2021 at Our Savior Lutheran Church, 300 N. Madison Blvd., Bartlesville with Pastor Donald Simpson officiating. Services are under the direction of Carter Davis and the Davis Family Funeral Home & Crematory – Walker Brown Chapel. Online condolences and remembrances may be shared at www.DavisFamilyFuneralHome.com.

Brother Gerald Arwood Taylor (84), of the Bartlesville Masonic Lodge #284 and Akdar Shrine of Tulsa, laid down his working tools on July 13, 2021. Jerry, as he was familiarly known, was born in Detroit, Michigan, on February 24, 1937, and grew... View Obituary & Service Information

The family of Gerald Arwood Taylor created this Life Tributes page to make it easy to share your memories.