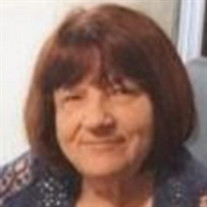 Gertraud “Gerti” Henshall, longtime Bartlesville resident, died Friday in her hometown. She was 78, and though born in Germany, spent most of her life in America where she was blessed with love and family. Gerti was born the daughter of Emil and Karoline (Pachner) Tausch on Oct. 13, 1941, in Friedberg-Sudetenland, Germany, the Army Home of Elvis Presley. Gerti grew up in war-torn Germany with her mother, brother and sister - her father never returned from the war. Gerti married an American soldier Jim Wyler and one precious daughter Debby was born to this union. They moved to Cincinnati, Ohio, in 1964 to start their new life, but Jim left Gerti and Debby shortly after arriving. Gerti was a single mom who wanted the best for her child and worked hard to put Debby through a good Catholic school. She decided in 1980 that the two of them would move to Dewey, OK, to be closer to Gerti’s sister Frieda. Gerti started work with Phillips Petroleum and later with Applied Automation. She also worked several years at the Walmart bakery before retiring. Gerti was introduced to Johnnie Henshall by his daughter Kimberly, and they hit it off so well that they wed on June 24, 1983. They enjoyed 36 years of loving marriage together before Johnnie preceded her in death on Dec. 13, 2019. Gerti loved country music and watching the live bands out at the casino. She was the #1 fan of her beloved “Rockin Johnnie” and his karaoke renditions of Amarillo By Morning, Silver Wings and Hello Darling. Johnnie was a longtime member and Past President of the Fraternal Order of The Eagles Aerie 610 so he and Gerti enjoyed traveling to Eagles conventions throughout the country from New York to Washington state. They always had fun together - whether it was going to Branson, MO, eating at Murphy’s or calling bingo. Gerti captured her favorite moments with pictures and loved showing them to others. Visiting with friends and collecting Beanie Babies were her passions, and she spent countless hours keeping up with everyone on the phone and looking for special Beanie Babies to give away as gifts. Most of all, Gerti loved her family on both sides of the Atlantic, and she will be dearly missed. Gerti is survived by three children, Debby Gehrke and Tim of Broken Arrow, Kenny Henshall and Cristy of Bartlesville, and Kimberly Henshall and Darrell of Nowata; one brother Emil Tausch and Petra of Germany, one sister Frieda Kay of Dewey; seven grandchildren, Chett Gehrke and Devin, Chadd Gehrke and Hillary, Dalton Henshall and Cassie, Kaylee Replogle and Justin, Isabella Baughman, Kyle Scheer and Zachary Scheer; three great grandchildren, Nolan, Lily, and Cadence; nephew Joshua Jones and Cashmere; nephew James Kay; niece Stephanie Mata and boyfriend David; and a host of other family and friends. She was preceded in death by her parents and loving husband Johnnie. Visitation will be held Wednesday, 10-8 and Thursday, 9-1 at the Davis Family Funeral Home & Crematory - Walker Brown Chapel, 918-333-7665, 4201 Nowata Rd, Bartlesville. Funeral services will be at 2 p.m. Thursday, April 30, at the Walker Brown Chapel. Interment will follow in the White Rose Cemetery. Services are under the direction of Carter Davis and the Davis Family Funeral Home & Crematory – Walker Brown Chapel. Online condolences and remembrances may be shared at www.DavisFamilyFuneralHome.com.

Gertraud &#8220;Gerti&#8221; Henshall, longtime Bartlesville resident, died Friday in her hometown. She was 78, and though born in Germany, spent most of her life in America where she was blessed with love and family. Gerti was born the daughter... View Obituary & Service Information

The family of Gertraud "Gerti" Henshall created this Life Tributes page to make it easy to share your memories.