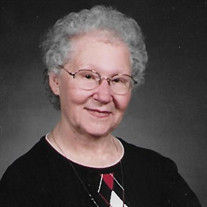 Gertrude M. Fuller, 91, of Dewey, died Thursday in Dewey. Gertrude was born the daughter of Artho Leroy and Elsie Thelma (Rush) Simmons on August 6, 1927, in Cloud Chief, OK, in Washita County. Her father was a Methodist minister and the family lived in various communities while she was growing up. Gertrude graduated from Carnegie High School in 1945 and went on to further her education at Oklahoma College for Women in Chickasha. Some years later while attending Bartlesville Business College, Gertrude returned to her car after class and discovered she had blocked in a fellow student. That chance encounter led to coffee and a lifelong love affair with Jack V. Fuller. They united in marriage in January of 1965 and made their home in Dewey. Gertrude had a 20 plus year long career with 66 Federal Credit Union as a home loan officer which was very rewarding and she made many wonderful friends through the years. After just 28 years of loving marriage Jack preceded her in death in 1993. Gertrude loved the Lord and served in the various ministries of the church from a young age. While a teen she played the organ, led the choir and worked with the children in churches her father pastored. For the last 60 plus years she has been a member of the Dewey United Methodist Church and participated in WSCS women’s group and sang in the choir until recently. She volunteered with the Jane Phillips Auxiliary at the hospital and crocheted hundreds of pink and blue baby hats that every newborn receives. Jack and Gertrude enjoyed time together spent at their lake house on Lake Taneycomo near Branson. They spent countless hours on the pontoon boat, fishing for trout. Gertrude was a loving mother and grandmother - she was an early riser and famous for her banana bread, jelly rolls, and biscuits and gravy. She made sure her grandbabies knew they were loved and she will be dearly missed. Survivors include Gertrude’s daughters, Karen Martin of Dewey, and Donna Brown and husband Terry of Edmond; her son Ronald Fuller and wife Sally of Dewey; her sister Thelma Likens and husband Andy of Dewey; her grandchildren, Jamie Wilson and husband Jim of Dewey, Kevin Little and wife Hope of Maumelle, Arkansas, Crystal Slinker and husband Keith of Beaver Creek, Ohio, Brian Fuller and wife Krisha of Mandan, North Dakota, Amber Taylor and husband Glenn of Edmond, and Derek Brown of Edmond; 18 great-grandchildren and 9 great-great-grandchildren; and a host of friends and family. She was preceded in death by her parents, her husband Jack V. Fuller, and her son-in-law Jr. E.T. Martin. Gertrude’s family will receive friends at the Davis Family Funeral Home – Dewey Chapel, 918-534-3030, 113 S. Osage (Hwy. 75), Dewey, on Sunday, May 5, from 3-5 p.m. Visitation will also be held on Sunday from 12-5. Funeral services will be held 10 a.m. on Monday, May 6, at the Dewey United Methodist Church, with Rev. Jinx Barber officiating. Interment will follow in the Dewey Cemetery. Services are under the direction of Carter Davis and the Davis Family Funeral Home – Dewey Chapel. Online condolences and remembrances may be shared at www.DavisFamilyFuneralHome.com.

Gertrude M. Fuller, 91, of Dewey, died Thursday in Dewey. Gertrude was born the daughter of Artho Leroy and Elsie Thelma (Rush) Simmons on August 6, 1927, in Cloud Chief, OK, in Washita County. Her father was a Methodist minister and the family... View Obituary & Service Information

The family of Gertrude M. Fuller created this Life Tributes page to make it easy to share your memories.

Send flowers to the Fuller family.