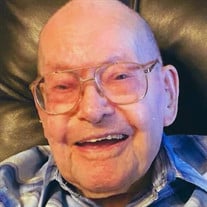 Glen Truman Stevens, Bartlesville native son and Army veteran, was 102 when he died in his hometown, Sept. 20, 2021. But he serves a Risen Savior and joins his wife Lucille and siblings in their heavenly home for all eternity. On May 17, 1919, Glen was born the third out of an eventual 14 children to Stephen E. Stevens and Fay Sheets Stevens. Glen grew up in the Bartlesville area and he served 4 and a half years in the U.S. Army Infantry’s 57th Field Artillery Battalion during World War Il. During his honest and faithful service to his country, Glen was deployed to the Pacific Theater and received multiple service medals including the Philippine Liberation Ribbon with two Bronze Service Stars. Not long after the Second World War ended, and just one week after his honorable discharge, Glen married Lillian Lucille Fox on October 24, 1945, in Olathe, Kansas. After living in California for 32 years and retiring from Ford Motor Co. where he worked as a mechanic, Glen and Lucille returned to Bartlesville. They were married 63 years until her death on January 10, 2009. Glen was always jolly and looked on the bright side. Not surprisingly, he made many friends everywhere he went. He loved writing stories and telling tall tales. He chronicled his family history back to his childhood in the hills of Osage County where he recalled cutting wood with a crosscut saw during the Great Depression and being paid just a precious $1 dollar a rick. Not surprisingly, he knew the value of hard work and, with a knack for woodworking, Glen always had a project to work on. On the very night he passed, Glen was up singing with his brother Virgle “When the Roll is Called Up Yonder”. The joy of the Lord was his strength. And throughout his life, he enjoyed singing old hymns and favorites, playing the mandolin beautifully, and worshipping his Lord God without ceasing. Above all things, Glen was all about faithfully serving the Lord. He was preceded in death by his wife Lucille and 11 siblings: Robert, Orville, Cecil, Lester, Chester, Loraine, Clifford, Vaughn, Marvin, Arlene and Geraldine. Surviving Glen are brothers Virgle and Gerald, and a host of extended family. Visitation will be held Sunday from 12-5 at the Davis Family Funeral Home - Dewey Chapel, 918-534-3030, 113 S. Osage (Hwy. 75), Dewey. Services will be held 10 a.m. on Monday, at the First Baptist Church of Dewey, with Pastor Mark Wright officiating. Interment will follow in the Wann Cemetery. Services are under the direction of Carter Davis and the Davis Family Funeral Home – Dewey Chapel. Online condolences and remembrances may be shared at www.DavisFamilyFuneralHome.com.

Glen Truman Stevens, Bartlesville native son and Army veteran, was 102 when he died in his hometown, Sept. 20, 2021. But he serves a Risen Savior and joins his wife Lucille and siblings in their heavenly home for all eternity. On May 17, 1919,... View Obituary & Service Information

The family of Glen T. Stevens created this Life Tributes page to make it easy to share your memories.

Send flowers to the Stevens family.