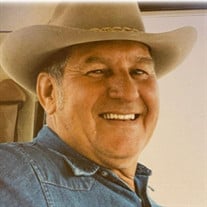 Glenn “Ray” Hall, Army veteran and Wynona, Osage County, resident was 90 when he died Thursday in Dewey. Ray was born in Bartlesville, the son of James Michael and Helen Lena (Saylor) Hall on March 3, 1931. After receiving his formal education in Bartlesville schools, Ray joined the U.S. Army and served honorably in Korea. He was awarded the Purple Heart and a medal of honor for his bravery under fire. Once home Ray went to work for Portland Cement in Dewey. While he and his coworkers were out on strike, Ray decided to join the Bartlesville Fire Department. On his days off, he worked as an electrician for the city. Ray united in marriage with Charlene Brookshire and four children were born to them: Helen, Vicki, Barbara and Jeff. After 20 years of faithful service, Ray retired from the fire dept. and continued his second career at his ranch. Later Ray met Georgia Lucas and they enjoyed more than 30 years of loving marriage. Together with Georgia, Ray loved to rodeo - he was a steer roper and she ran barrels. They traveled near and far to rodeo, winning several saddles and buckles along the way. He rodeoed till his early 80s and then decided to buy a Harley-Davidson to ride. Ray enjoyed skeet shooting and skeet shoots, as well as yearly hunting trips to Colorado with friends to hunt elk. Ray’s children remember growing up with horses in the pasture and rounding them up for fun rides. He will be dearly missed. Ray is survived by his children: Helen Greer, Vicki Sousa, Barbara Hopper and husband Kim, and Jeff Hall; sister Mary Hall Leemhuis, four grandchildren Travis Sousa and wife Laryssa, Spencer Hopper and wife Stephanee, Clinton Auschwitz, and Lucas Hopper and wife April; and seven great grandchildren, Dylan, Ava, Dutch, Nolan, Hudson, Colton and Carson. He is preceded in death by his parents, wife and three brothers Mike, Henry and Bob. Visitation will be held on Wednesday from 10-8 and Thursday 9-1, at the Davis Family Funeral Home - Dewey Chapel, 918-534-3030, 113 S. Osage (Hwy. 75), Dewey. Services will be held 2 p.m. Thursday, at the Davis Family Funeral Home - Dewey Chapel. Interment will follow in the Dewey Cemetery. Services are under the direction of Carter Davis and the Davis Family Funeral Home – Dewey Chapel. Online condolences and remembrances may be shared at www.DavisFamilyFuneralHome.com.

Glenn &#8220;Ray&#8221; Hall, Army veteran and Wynona, Osage County, resident was 90 when he died Thursday in Dewey. Ray was born in Bartlesville, the son of James Michael and Helen Lena (Saylor) Hall on March 3, 1931. After receiving his formal... View Obituary & Service Information

The family of Glenn Ray Hall created this Life Tributes page to make it easy to share your memories.

Send flowers to the Hall family.