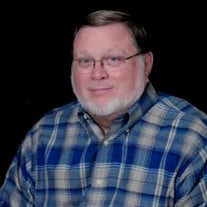 Glenn Edward “Eddie” Sise passed away Saturday, November 14, 2015. A memorial service will be held at 1:00 on Friday, November 20, at the First Presbyterian Church with Elder Kristy Rodgers officiating. Cremation arrangements are under the direction of Walker-Brown Funeral Home. Glenn Edward Sise Jr. was born August 13, 1945 in Bartlesville to Glenn Edward Sr. and Bernice (Kosty) Sise. He graduated from Bartlesville’s College High in 1963. Eddie proudly served his country for four years in the U.S. Army. He married Dee Arlen Sauer on August 18, 1972 in Bartlesville. Eddie had 35 years of dedicated service at PSO where he worked as an engineer before retiring in 2005. Eddie was a lifelong avid coin collector and a member of the American Numismatic Association since 2004. After serving as local and state President of the Home Builder’s Association, he was honored with the distinction as a lifetime member. Being the father of two little girls didn’t slow Eddie down when it came to the evening wrestling matches on the living room floor, but having grandsons meant he got to be a regular at the little league baseball fields. The wrestling tradition continued; however, Papa moved the wrestling matches with the boys to the sofa. Eddie spent many happy hours with his dear friend Roger Skelly, on their fishing boat, “The SS Doughhead”. Before discovering his love of antiques, he could often be found at Adams Golf Course, challenging his buddies to a round of golf, which usually lasted most of the day. One of his favorite retirement past times was daily meetings with the donut shop and lumberyard gangs to solve all the world’s problems. He seldom missed a breakfast meeting with his old high school buddies, better known as the Geezers. Eddie is survived by his wife Dee Sise and daughters Kim Sise and fiancé Jared Coppedge, Kelli Silva and husband Jeremy, and his uncle Gordon Sise and wife Betty, all of Bartlesville. He was blessed with three grandchildren, Austin Coppedge and Aidan and Carson Silva and enjoyed great times with his beloved cousins and friends. His parents preceded him in death. In lieu of flowers, the family requests donations be made to Meals on Wheels of First Presbyterian Church in Bartlesville, or the Boys and Girls Club of Bartlesville.

The family of Glenn "Eddie" Sise created this Life Tributes page to make it easy to share your memories.

Send flowers to the Sise family.