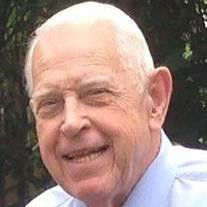 Gordon Edward Fletcher, 84, of Bartlesville, Oklahoma, passed away peacefully at home, surrounded by loved ones on April 3, 2016. Gordon was born in Portland, Oregon to Allan Taylor Fletcher and Elsie Viola Fletcher (Schulze) on June 8, 1931 and moved with his parents and older sister, Ruth, to Klamath Falls, Oregon in 1936. He graduated from Klamath Falls High School as a three-year letterman in Football and Track and placed second in the 200-yard low hurdles at the Oregon High School Track and Field Championships. Any prospect of playing collegiate sports ended when he suffered a severe knee injury playing football in his senior year of high school. An avid tennis player and skier in his late youth and early adult years, Gordon transferred from Oregon State University to Brigham Young University after his freshman year to experience Utah powder and advance his skills as part-time ski instructor. Gordon graduated with a B.S. in Chemistry from Brigham Young University and an M.S. in Chemistry from Oregon State University and was employed as a chemist for over 25 years at the Department of Energy and its successor agencies. He then worked for seven years in the same capacity at Quality Analytical Laboratory in Kansas City, MO before retiring in 1994. Gordon was published in numerous scientific journals throughout his career. A few years later, bored with retirement, Gordon formed his own company, GC Enterprises, a formulator and distributor of fingerprinting solutions utilized by crime labs at the state, federal and international levels and then sold the company to a Japanese firm in 2010. Gordon served in the US army during the Korean War and played revelry on the bugle for the 44th Division. He was an accomplished trumpet player and also learned to play the bagpipes while in the army. Gordon married his only true love and eternal companion, Connie Mae Fletcher (Pierce), on April 1, 1961 in Cardston, Alberta, Canada and the couple celebrated their 55th anniversary several days before his passing with all three sons present. A devoted and loving husband and father with an understated sense of humor and a keen intellect, Gordon’s positive demeanor and good nature certainly played a significant role in his ability to overcome three bouts of cancer, the first at age 38, and survive a severe cardiac arrest when he was 72. Gordon was a true disciple of Christ and demonstrated his love to the Lord through his numerous acts of service and kindness to those in need. He also served in various capacities over the years at the Church of Jesus Christ of Latter-Day Saints in Bartlesville. Gordon was preceded in death by his parents and his sister, Ruth Wagoner, and is survived by his wife, Connie, his three sons, David Allan, of Provo, Utah, Bradley Gordon and his wife, Karalee, of Simi Valley, California, and Jeffery Karl, of Draper, Utah, eleven grandchildren and many cousins, nephews and nieces. A Memorial Service will be held for Gordon at 2:00 p.m. on April 12 at the Church of Jesus Christ of Latter-Day Saints, 1501 Swan Drive, Bartlesville. Interment will follow at the White Rose Cemetery. Military Rites will be conducted by American Legion Post #105 Honor Guard. In lieu of flowers, contributions can be made to Comforting Hands Hospice, 2450 SE Washington Blvd # A, Bartlesville, OK 74006.

The family of Gordon Edward Fletcher created this Life Tributes page to make it easy to share your memories.

Send flowers to the Fletcher family.