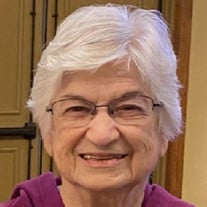 Gwen E. Whitaker of Grove died Friday in Springfield, MO. She was 87 years young and her sweet smile will be missed on earth by many, especially her beloved family and church family. But Gwen served a Risen Savior and will dwell in the house of her Lord forever. Gwendolyn Eulabeth Whitaker was born the daughter of Willie Floyd and Lola Bell (Street) McCollough on July 7, 1934, in Ramona, OK. The family moved often between Oklahoma, New Mexico and Colorado before finally settling in Nowata, OK. She attended Delaware High School and excelled at her business courses, graduating in 1952. While working at Reda Pump and on lunch break, Gwen bumped into Norman Whitaker at Jack’s Café. Norman was smitten and it was a few days later when he finally caught Gwen at work and asked her to the movies, but Gwen politely declined and instead invited him to her local revival meeting. They quickly fell in love and united in marriage on December 6, 1953, in Nowata. The Whitakers made their home in Bartlesville, then went on to Ochelata. Gwen completed business school and worked as a secretary at Reda Pump, Cities Service, First Assembly of God, and the phone company. Gwen was a loving and supportive wife who became a devoted, caring mother to their three girls and loved spending time with them. After more than 50 years of loving marriage, Norman preceded her in death in 2009, and Gwen moved to Tulsa for several years before moving in 2018 to Grove to be closer to family. Gwen’s passions in life centered around caring (and cooking!) for others. She was everyone’s Grandma Gwen, and she was famous for her chocolate chip cookies. Gwen was a wonderful seamstress and could sew anything. True to her heart and talent, Gwen specialized in quilts which she generously gave away to family, friends, charities and newborn babies. She volunteered to organize and host funeral dinners at her home church First Assembly of God in Bartlesville for many years. If food is a love language, Gwen spoke it well and she not only enjoyed cooking for others, but she enjoyed family gatherings, whether at Christmas or anytime of the year. Gwen is survived by her loving children, Susan (Tony) Spencer, Sharon Whitaker and Shelli (Chuck) Oker; sister Marcella (Danny) Lockman; grandchildren, Becky (Joshua) Lee, Micah Spencer, Allie (Stephen) Stammer, Andy (Toni) Koons and Jaralyn Koons; and 11 great grandchildren, Taylor, Preston, Zoey, Jackson, Xaiden, Paige, Liam, Elliot, Whitaker, Emmett and Lincoln. She also leaves behind her sweet yorkie Luke and her grand dog Brady. She is preceded in death by her parents; husband; brothers JB McCollough, Jarvis McCollough and Steve McCollough; and sisters Lodema Truitt and Dorothy Keith. Gwen’s family will receive friends at the Davis Family Funeral Home & Crematory – Walker Brown Chapel, 918-333-7665, 4201 Nowata Rd, Bartlesville, on Thursday, from 6-8 p.m. Visitation will also be held on Thursday from 10 a.m.-8 p.m. and Friday 9 a.m.-1 p.m. In lieu of flowers memorials may be made to the Lighthouse Pregnancy Center, 638 N 5th, Jay, OK 74346. Funeral services will be held 2 p.m. on Friday, at the Davis Family Funeral Home & Crematory – Walker Brown Chapel, with Mr. Arlis Henegar officiating. Interment will follow in the Dewey Cemetery. Services are under the direction of Carter Davis and the Davis Family Funeral Home & Crematory – Walker Brown Chapel. Online condolences and remembrances may be shared at www.DavisFamilyFuneralHome.com.

Gwen E. Whitaker of Grove died Friday in Springfield, MO. She was 87 years young and her sweet smile will be missed on earth by many, especially her beloved family and church family. But Gwen served a Risen Savior and will dwell in the house... View Obituary & Service Information

The family of Gwendolyn Eulabeth Whitaker created this Life Tributes page to make it easy to share your memories.

Send flowers to the Whitaker family.