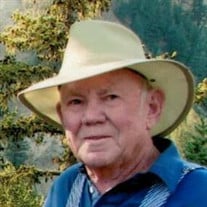 Harold Neal passed away Wednesday, August 5, 2015 at Jane Phillips Medical Center due to complications from pneumonia. Services will be held 11:00 a.m. Monday, August 10, 2015 in the Walker-Brown Funeral Home Chapel with Reverend Chad Perceful officiating. Interment will be in Memorial Park Cemetery. Arrangements are under the direction of Walker-Brown Funeral Home. Harold Nelson Neal was born November 3, 1928 in West Fork, AR to Samuel J. and Icie Jane (Carter) Neal. He moved to Pawhuska with his parents in the early 1930's where he attended school. He married Evelyn Grace Adams on February 2, 1947. They celebrated 61 years of marriage before her death on July 28, 2008. Harold was blessed with a fascinating and wonderful life full of a wide variety of life and work experience. He could do anything including truck driving, auto mechanic, taxi driver, railroad worker, electrician, radio/TV repair and fire fighter. Second only to his family was his love of country music. An accomplished player of all string instruments, but the "fiddle" was his favorite and ole time fiddle tunes were his joy. He researched violin making and hand crafted, well accepted violins. He performed and had high rankings in "ole time fiddle" contests as well as being the leader of his own country western band "Goldy and the Nuggets." Harold was affectionately called "Goldy" at the Bartlesville Fire Department where he served as Captain until a life threatening injury forced medical retirement in 1972. Harold is survived by his two children, Barbara Nell Gay and husband John of Bartlesville, and Sammy Joseph Neal and wife Sara of North Carolina. He was blessed with seven grandchildren: Shannon Gay, Lacy Jack, Leroy Neal, Leslie Culver, Joseph Neal, Danny Neal along with eleven great grandchildren. One brother, John T. "Tommy" Neal of Colorado Springs, CO and many, many loving relatives and friends. Harold was preceded in death by his parents, wife, Evelyn, sister, Wilma Hawkins and brother, Howard Neal. Harold will be very much missed, but would want everyone to remember the "good old days". Like his father, he did not like to say "Goodbye", but always "so long" or "see you later."

The family of Harold Neal created this Life Tributes page to make it easy to share your memories.

Send flowers to the Neal family.