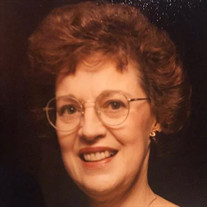 On Dec. 9, 2021, Harriet Ann Peters stepped into the loving arms of Jesus Christ, her Lord and Savior. Harriet was born on May 18, 1929 in Key West, Florida. As a child, she loved to swim in the ocean and collect seashells with her siblings. Her father was one of Earnest Hemingway’s fishing buddies. Her family moved to Miami when she was 9 years old. After graduating from Miami High School in 1947, Harriet studied music for 2 years at Florida State Univ. She loved being a member of Kappa Alpha Theta sorority. Harriet decided to become a speech therapist and moved to the only school with the program at that time, the University of Wichita. This is where she met the man she would love for over 65 years! Harriet graduated in 1952 and began work on a master’s degree. After spending considerable time and effort pursuing Harriet, Robert was successful at obtaining her hand in marriage. They were married on Aug 14, 1954. Their daughter, Ann, was born in May, 1956. Their family moved to McPherson, KS, where 2 sons were born. Michael in Jan, 1958 and Timothy in April, 1960. In 1967 the family moved to Bartlesville, OK where Robert was employed in the public school system. Harriet returned to teaching part time when the children grew older, and eventually worked full time until she retired in 1989. Harriet was a loving servant of the Lord, serving Him by serving others. In her younger years, Harriet was a Cub Scout leader, Girl Scout leader, Sunday School teacher, and always available to help elderly neighbors with chores. She was a member of the First Presbyterian Church for over 50 years, and served in a number of roles. She was in the bell choir, prayer chain coordinator, and helped pack Meals on Wheels. Harriet and Robert enjoyed walking on the Pathfinder Parkway, swimming at the YMCA, and watching and identifying birds. Harriet also enjoyed sewing, playing the piano and reading. Most of all, Harriet loved her grandchildren. They gave her so much joy! Mimi and Pa were the most innovative grandparents of all time, teaching the grandkids chess, piano, painting, soap carving, knitting, crocheting, sewing, and bird watching. A week with them was the highlight of the summer! Harriet is survived by daughter Ann (Buck) Walsh, Tulsa; son Mike (Robyn) Peters, Broken Arrow; son Tim (Erinn) Peters, Okla. City; and by grandchildren Micah (Lance) Nagy, Broken Arrow; Ryan (Christian) Peters, Owasso; Savannah (Trevor) Taylor, Edmond; Hannah Walsh, Okla. City; and great-grandchildren Liam and Nora Nagy. She is also survived by brother Bob Jones, West Palm Beach, Florida; brother-in-law Donald Peters, Bartlesville; brother and sister-in-law Richard and Helen Peters, Edmond; many nieces and nephews, and many dear friends. Harriet was preceded in death by her parents, her husband Robert, her brother Howard Jones, sister and brother-in-law Carolyn and Vernie Graves, sister-in law June Peters, brother and sister-in-law Gene and Clarice Peters, and many uncles and aunts. The family would like to thank the staff of Beehive Homes of Glenpool, Grace Hospice, Bios Home Health. Dr. John Gearhart, and Dr. Eric Flegel for their kindness and loving care of Harriet. In honor of Harriet’s life, donations may be made to First Presbyterian Church in Bartlesville, or National Alzheimer’s Association. A memorial service will be held at the First Presbyterian Church, 505 S.E. Dewey, Bartlesville, OK on Sat, Dec. 18th at 11:00 am. Services are under the direction of Carter Davis and Davis Family Funeral Home – Walker Brown Chapel. Online condolences and remembrances may be made at www.DavisFamilyFuneralHome.com

On Dec. 9, 2021, Harriet Ann Peters stepped into the loving arms of Jesus Christ, her Lord and Savior. Harriet was born on May 18, 1929 in Key West, Florida. As a child, she loved to swim in the ocean and collect seashells with her siblings.... View Obituary & Service Information

The family of Harriet Ann Peters created this Life Tributes page to make it easy to share your memories.

Send flowers to the Peters family.