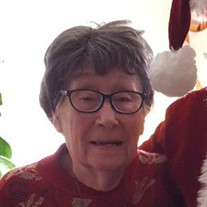 Helen was born to James Self Wilson and Ada Nancy Dehart Wilson in Dewey, Oklahoma on January 28, 1925. Helen was raised in the Dewey community and received her education in the Dewey school system. Helen married Glen Huffman in 1942. They were married 64 years, living their early married years at Port Author, Texas, and then in Portland, Oregon. They moved to Neodesha, Kansas in 1946, and then back to Dewey in 1952. When returning to Dewey, Glen was employed by the Gas Service Company and Helen worked as unit secretary at Jane Phillips Hospital. Helen retired in 1987, and in 1995 Helen and Glen moved to Grove, Ok, and enjoyed four years there before returning home to Dewey. That four years in Grove, they enjoyed the friendship of the people of the Church of the Nazarene, living on the lake, and especially the closeness of having her sister Eva Grace Schafer and husband Lawrence, and sister Shirley and husband Eugene May as next door neighbors. Helen and Glen and her two sisters and husbands played various card games nightly, with some cheating, and much laughter. Helen became a Christian as a young child and was a member of the Church of The Nazarene. She taught Bible classes for 50 years, and was grateful for the love and grace of God through faith in Jesus Christ. Helen is survived by her son, Mike and wife Vesta Huffman; four grandchildren, Thomas, Melissa, Michael, and Corey Huffman; three great-grandchildren, Thomas, Isaac, and Carbon; sister, Shirley and husband, Eugene May; nieces and nephews that she dearly loved; adopted sister, Mildred Unruh and her Nazarene Church Family, and caregiver, Virginia Thomason. She was preceded in death by husband, Glen Huffman; parents, James and Ada Wilson; daughter, Glenda Jo Huffman; sisters, Margie Drake, Eva Grace Schafer; and brother, Bill and wife Luada Wilson. In lieu of flowers memorials may be made to the Gideons International, PO BOX 97251, Washington DC 20090. Services will be held 2 p.m. on Wednesday at the Dewey Church of the Nazarene. Services are under the direction of Carter Davis and the Davis Family Funeral Home – Dewey Chapel. Online condolences and remembrances may be shared at www.DavisFamilyFuneralHome.com.

Helen was born to James Self Wilson and Ada Nancy Dehart Wilson in Dewey, Oklahoma on January 28, 1925. Helen was raised in the Dewey community and received her education in the Dewey school system. Helen married Glen Huffman in 1942. They... View Obituary & Service Information

The family of Helen Elizabeth Huffman created this Life Tributes page to make it easy to share your memories.

Helen was born to James Self Wilson and Ada Nancy Dehart Wilson...

Send flowers to the Huffman family.