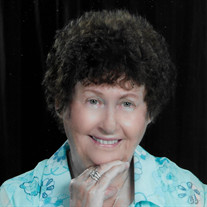 Ila Jane Yelton, 93, of Ponca City, went to be with her Lord and Savior Sunday in Ponca City. Ila Jane was born the daughter of Charles Bennett and Ethel Jane (Baker) Zimmerman on May 15, 1925, on the family farm in Kingfisher County, OK. At age five her family moved to Delaware, in Nowata County, OK. Ila met the love of her life Carl Vincent Yelton and they were united in marriage on October 6, 1943, in Pawhuska, OK. In 1945 they made their first move of many that would take them to Tulsa, back to Delaware, Okemah and Tonkawa with Carl’s various positions in the oil industry. Once retired they moved to Bartlesville in 1987 to be closer to their extended family. After 58 loving years of marriage Carl preceded her in death on February 26, 2002. Ila Jane remained in Bartlesville until 2010 when she moved to Ponca City to be closer to her son. When the kids were younger the family took many memorable road trips to Chicago, to Memphis to see the shimmering gates of Graceland, to Kentucky to explore the Mammoth Cave National Park, and several trips to California. Square dancing was Ila Jane’s idea and Carl went along for classes. But they both soon realized it was for them and they enjoyed many years dancing with different groups and at special events. They also enjoyed having friends over to play pitch and other card games. Ila Jane had a strong work ethic, liked to stay busy and made friends easily, so it came naturally to her to sell Avon. Her passions including cooking, working in her flower gardens and spending time with her friends. She was known for her homemade pies and Carl enjoyed eating whatever she made. She was a natural host and enjoyed entertaining in her home. She loved the Lord and was a member of the Methodist Church in the many communities she lived in. Most of all she loved her family and showered everyone with affection and loving hugs. Ila Jane is survived by her children, Carlene Cunningham and Doug of Tustin, CA, John W. Yelton and Suzanne of Newton, UT, and Jerry Michael Yelton and Diana of Tonkawa, OK; sister Barbara Leverich; brother and sister-in-law Harold and Peggy Yelton; seven grandchildren, Sara Cunningham Cooper and Gordon, Matthew Cunningham and Danielle, Jared Yelton, Zachary Yelton, Shannon Stephens and Curtis, Miranda Myer and Alex and Ben Allen; 12 great grandchildren; and many nieces and nephews. She is preceded in death by her parents, husband, and siblings Juanita Templeton, John Zimmerman and Vic Zimmerman. Visitation will be held on Tuesday from 10-8, at the Davis Family Funeral Home – Walker Brown Chapel, 4201 Nowata Road in Bartlesville. Funeral services will be held 10 a.m. on Wednesday, January 23, at the Davis Family Funeral Home – Walker Brown Chapel. Interment will follow in the Nowata Memorial Park Cemetery. Services are under the direction of Carter Davis and the Davis Family Funeral Home – Walker Brown Chapel. Online condolences and remembrances may be shared at www.DavisFamilyFuneralHome.com.

Ila Jane Yelton, 93, of Ponca City, went to be with her Lord and Savior Sunday in Ponca City. Ila Jane was born the daughter of Charles Bennett and Ethel Jane (Baker) Zimmerman on May 15, 1925, on the family farm in Kingfisher County, OK. At... View Obituary & Service Information

The family of Ila Jane Yelton created this Life Tributes page to make it easy to share your memories.

Send flowers to the Yelton family.