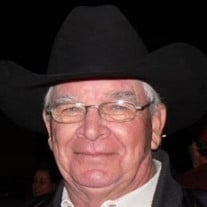 Mr. Ira Lee Haughn of Bartlesville, OK passed into eternal rest at 9:38 a.m., January 26, 2021 at the family home. Ira was born October 7, 1939, the son of Oscar & Velma (Davis) Haughn. He was raised and educated in Caney, Kansas, graduating with the Class of 1957. After trying out other employment adventures, Ira found his true calling in 1972 when he began life riding wide open spaces as a cowboy tending to cattle and then later in 1995, adding the wild horse program to his routine. His career as a ranch manager spanned 35 years with Tadpole Cattle Company and an additional 7 years with the Gallery Ranch. He married Crystal Ralph-Haughn on September 23, 2000. She survives of the home. Other survivors include sons Kaleb Ralph of Bartlesville, Brad Haughn and wife Debbie Decker-Murphy of Broken Arrow, OK; Kevin Haughn and Sheryl Fitch of Coweta, OK; Chris & Sherry Haughn of Coweta, OK; a host of grandchildren and great-grandchildren; a brother, Robert Haughn and wife Sheila of Ponca City; sister Delores Barnhart and husband Jack of Ottawa, KS; nieces, nephews and a multitude of friends. Ira was preceded in death by his parents, Oscar and Velma (Davis) Haughn, one brother and 4 sisters. In his last breaths, he had family by his side as he met his divine appointment with the Lord. Ira’s trust in God and his belief in the decency of people is a legacy he will always leave behind for others. The entire family would like to express sincere appreciation to Sam Hill and his amazing team at Comforting Hands Hospice for their quick response and steadfast support during our time of need. Between the amount of love and compassion we received from their phenomenal team of nurses – we are left with peace and gratitude. “When the road looks rough ahead, remember the Man Upstairs and the word Hope. Hang onto both and tough it out.” – John Wayne Ira’s family will receive friends at the Davis Family Funeral Home and Crematory – Walker Brown Chapel, 918-333-7665, 4201 Nowata Rd, Bartlesville, on Thursday, January 28, from 6-8 p.m. Visitation will also be held on Thursday from 12-8, Friday 10-12. A Celebration of Life Service will be held at 2 p.m. on Friday, January 29, at the Davis Family Funeral Home and Crematory – Walker Brown Chapel. Services are under the direction of Carter Davis and the Davis Family Funeral Home and Crematory – Walker Brown Chapel. Online condolences and remembrances may be shared at www.DavisFamilyFuneralHome.com.

The family of Ira Lee Haughn created this Life Tributes page to make it easy to share your memories.

Send flowers to the Haughn family.