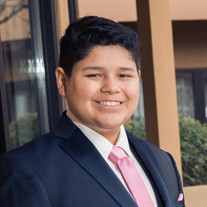 Iziah Ainsley Martinez, 13, of Fargo, ND, died Sunday in Netawaka, KS. Iziah Ainsley Martinez had an abundance of life, love, and laughter. He could walk into a room and smile, the room would instantly brighten. His protective nature came natural to him. His brothers and sisters were always his main priority even if they would annoy him to no end. They would mess with his stuff and mess him up playing his game, but he was never mean. He was fun and energetic. He has a whole football team of friends and family. Iziah’s laugh reached others, it was contagious. Laying Iziah to rest is one of the hardest things to ever do. He was fiercely loved and cherished by many. Iziah was just 13 years old when the creator called him home. Zaya, as we called him, was an amazing young man, a great friend, the best big brother to all his brothers and sisters, someone who was extremely helpful, and so much more. He was so full of life, he loved football and had been preparing for the upcoming season. He played video games, teased everyone, and just loved to make everyone smile. He had the best heart and did everything he could to help anyone out. Family: Father Leo Martinez Sr. of Flagstaff, Arizona, of the home Daniel and Amber Sanchez; Brother and Sisters of the home, Michael Sanchez, Gabriella Sanchez, Charcotetenna Miles Martinez, and Lionel and Leo Jr. Martinez, Daniel Sanchez Jr. of El Paso, Texas; Eric Sanchez of Columbus, Ohio; Mickie Evans of Cushing, Oklahoma. Maternal Grandparents Marlene and Roderick Wakolee of Horton, KS; Michael and Delorse Gabbard of Moorhead, Minnesota; Jesus Sanchez Jr. and Pauline Sanchez both of El Paso, TX; Paternal Grandparent Sam Littlecreek Martinez of Moenkopi, AZ and the late LaDonna Pennock and Great Grandparents the late Karen and Royce Juneau and Mildred Switch and Dave Martinez. Iziah had many uncles, aunties, and cousins, but he never called them that. He was always quick to refer to them as second moms, dads, brothers, and sisters.

Iziah Ainsley Martinez, 13, of Fargo, ND, died Sunday in Netawaka, KS. Iziah Ainsley Martinez had an abundance of life, love, and laughter. He could walk into a room and smile, the room would instantly brighten. His protective nature came natural... View Obituary & Service Information

The family of Iziah Ainsley Martinez created this Life Tributes page to make it easy to share your memories.

Send flowers to the Martinez family.