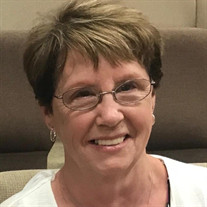 Jackie Chitwood was a loving and caring wife, mother, grandmother, sister, aunt, and friend. She left this earth to be with her Lord & Savior on September 5, 2021, at the age of 74. She was born Jacqueline Lee Kimbell to James and Margaret Kimbell on November 4, 1946, in San Francisco, California. She was their third child after son Jimmy and daughter Joanie. She had two younger sisters, Janice and Jill. They were a close-knit family and Jackie was raised from humble beginnings in the small town of Novato. As a young girl, Jackie had a daughter Jonni who she selflessly gave up for adoption and was later reunited with. After graduating Novato High School, Jackie met her soon-to-be husband Gary Chitwood. They married on August 28, 1965. Together, they had three children: Rebecca, Gary Jr., and Karen. The family lived in Livermore and San Jose before settling and building their life in Redding, California, in 1974. Jackie graduated from Shasta College in 1987 with a medical assistant license and retired from Shasta Community Health Center in 2011. Though they were divorced for some time, Jackie and Gary found their way back to each other and remarried on April 9, 2011. They set out and moved to Ramona, Oklahoma, and spent their days together tending to their land and animals. Seeing their love story unfold is a true testament to her faith and many answered prayers. Jackie often referred to Gary as her “sweet husband” who loved her fiercely. Jackie was a wonderful grandmother to 9 grandchildren and 11 great-grandchildren. She was so proud of her family and all they had accomplished. She never missed an opportunity to praise them and pour love into them. Since moving to Oklahoma, she spent many summers making her rounds across the country, stopping to visit and spend time with each of her children and grandchildren’s families. They were all the light of her life and brought her so much joy. I saw a quote the other day that said “your grandmother’s prayers are still protecting you today” - this could not be more true for all of Jackie’s grandchildren. She was always faithfully and fervently praying for her family and they will continue to be covered by her prayers for generations. Jackie was bold in her Christian faith and stood firmly on her beliefs. She took many under her wings: prayerfully ministering, nurturing and encouraging them through all life’s twists and turns. To know Jackie was to know one of the kindest, most genuine hearts on earth. Funeral services will be held at 11 a.m. on Saturday, September 25th at Ochelata First Baptist Church. Services are under the direction of Carter Davis and the Davis Family Funeral Home & Crematory – Walker Brown Chapel. Online condolences and remembrances may be shared at www.DavisFamilyFuneralHome.com.

Jackie Chitwood was a loving and caring wife, mother, grandmother, sister, aunt, and friend. She left this earth to be with her Lord & Savior on September 5, 2021, at the age of 74. She was born Jacqueline Lee Kimbell to James and Margaret... View Obituary & Service Information

The family of Jackie Lee Chitwood created this Life Tributes page to make it easy to share your memories.

Jackie Chitwood was a loving and caring wife, mother, grandmother,...

Send flowers to the Chitwood family.