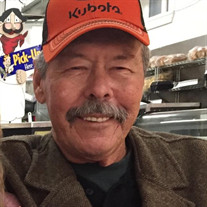 Jackie “Jack” Hadley, 73, of Dewey, died Friday in Bartlesville. Jack was born the son of Wilbur Jean and Margaret (Adamson) Hadley on July 18, 1946, in Bartlesville. He grew up on the family farm near Wann, driving trucks and tractors, and doing the various chores that come with living on a farm. It instilled a work ethic in him that would help him throughout his life. While he was still young, the family sold the farm and moved to Dewey where Jack completed his education graduating from Dewey High School in 1965. He went on to further his education at Northeastern Oklahoma A&M College (NEO) in Miami for two years before transferring to Oklahoma State Univ. to finish his bachelor’s degree. Out of college he worked for John Deere for a short while before starting his own construction company Jack Hadley Construction, and Hadley Land Company. He was a busy beaver and one of his many memorable projects was establishing the Deer Creek addition in Dewey. Jack loved his community and his neighbors, so he found time to help with various projects that would improve the lives of the residents - one of his favorites was the addition of the tennis courts at Don Tyler Park. Jack met Robin Yearout and they married on October 6, 1988, in Dewey and have been a loving couple ever since. Together the adventurous duo enjoyed the outdoors, camping, and riding motorcycles and four wheelers. They enjoyed hitting the road and traveling in their motor home so that their two fur babies Bella and Chloe could tag along. Over the years Jack and Robin took several cruises and celebrated their 10-year anniversary in Hawaii. During Jack’s younger years he took long motorcycle trips, camping along the way, and broke draft horses. His greatest passion in life was his family especially time spent with his son and grandson. Most mornings you could find Jack drinking coffee and visiting with his friends at Copan Truck Stop, McDonald’s or Boulevard Café. Jack is survived by his loving wife of 31 years Robin of the home, son John Roy Hadley, grandson Carter Russell Hadley, sister Wilma Jean Yearout and husband Alvin, sister-in-law Marilyn Hadley, mother in law Helen Yearout, brother in law James A. Yearout and wife Cheyrl, and numerous nieces and nephews. Jack is preceded in death by his parents, brother Hugh Edward Hadley, and father in law James C. Yearout. Jack’s family will receive friends at the Davis Family Funeral Home – Walker Brown Chapel, 918-333-7665, 4201 Nowata Rd, Bartlesville, on Tuesday, from 6-8 p.m. Visitation will also be held on Tuesday from 10-8 and Wednesday 9-1. Funeral services will be held 2 p.m. Wednesday, at the Davis Family Funeral Home – Walker Brown Chapel. Interment will follow in the Dewey Cemetery. Services are under the direction of Carter Davis and the Davis Family Funeral Home – Walker Brown Chapel. Online condolences and remembrances may be shared at www.DavisFamilyFuneralHome.com.

Jackie &#8220;Jack&#8221; Hadley, 73, of Dewey, died Friday in Bartlesville. Jack was born the son of Wilbur Jean and Margaret (Adamson) Hadley on July 18, 1946, in Bartlesville. He grew up on the family farm near Wann, driving trucks and tractors,... View Obituary & Service Information

The family of Jackie "Jack" Dee Hadley created this Life Tributes page to make it easy to share your memories.

Send flowers to the Hadley family.