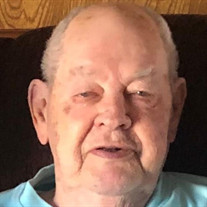 Jackie “Jack” Dean Nichols, 85, our beloved husband, father, grandfather, and great-grandfather passed on to heaven and will surely be missed. Jack was born February 27, 1936, in Bartlesville, OK, to Leonard Everet and Alice Marie (Curtis) Nichols. He graduated from Bartlesville College High School and worked various jobs while attending school. He enlisted in the United States Air Force and after basic training in Texas, was sent to Denver, CO, for special training. While on leave Jack married Carolyn Clydean Dye on May 29, 1957. Upon completion of training, Jack was sent to Kansas City, MO, to complete his service commitment. Jack and Carolyn then moved back to the Dewey-Bartlesville area, where Jack started a career with the Bureau of Mines. Jack enjoyed NASCAR, the Kansas City Chiefs, Dallas Cowboys, western movies, and country music. Jack was known as a “Jack of all trades,” as he could fix anything. But most of all, his family was his top priority. There were many special people in Jack and Carolyn’s lives, including Jadon Rush and Jennifer Garrettson, Logan and Adaleigh Gray, who they loved as their own and missed greatly when they became older. Jack is survived by his wife Carolyn; son, Scott Jason Nichols of Olathe, KS; four grandchildren, four great-grandchildren, and many friends. He was preceded in death by his parents; sister, Delores Hayes; and brother, Leonard “Bud” Nichols Jr. Jack’s family will receive friends at the Davis Family Funeral Home & Crematory – Walker Brown Chapel, 918-333-7665, 4201 Nowata Rd, Bartlesville, on Thursday, from 6-8 p.m. Visitation will also be Thursday from 10-8 p.m. Funeral services will be held 10 a.m. on Friday, at the Davis Family Funeral Home & Crematory – Walker Brown Chapel. Interment will follow in the Memorial Park Cemetery. Services are under the direction of Carter Davis and the Davis Family Funeral Home & Crematory – Walker Brown Chapel. Online condolences and remembrances may be shared at www.DavisFamilyFuneralHome.com.

The family of Jackie Dean Nichols created this Life Tributes page to make it easy to share your memories.

Send flowers to the Nichols family.