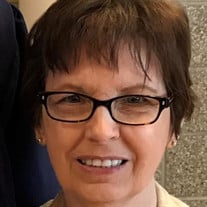 Jacqueline "Jackie" Sue Taylor passed away on January 30, 2019 in Bartlesville, Oklahoma after a brief illness. Jackie was born November 27, 1946 in Kennett, Missouri to Jack and Suetta (Barnes) Pruett. Her father worked for Firestone and later Pizza Hut which required them to move every couple of years. A funny story Jackie loved to tell was regarding a move the family made to Michigan in the 1950's. Her mother had gone to the butcher to buy a whole fryer chicken to make fried chicken. However, the Michigan butcher did not know how to cut up the chicken for frying and had never heard of fried chicken. Her mother, Suetta, cut the chicken up for him and then cooked him fried chicken. It was rumored that for years after that, the butcher made a good living selling the "new" southern delicacy called “fried chicken”. Jackie graduated from Treadwell High School in Memphis, Tennessee in 1965. After high school, she worked as a receptionist and considered being a flight attendant. Jackie met the love of her life Ron Taylor and after a brief courtship they were married September 16,1966 in Memphis, Tennessee. While her husband Ron worked for Missouri Pacific Railroad (later Union Pacific), Jackie settled into being a homemaker and raising a family. She taught kindergarten at Elliston Baptist Academy in Memphis, worked for the Shelby County Election Board, and was active at St. Anne Catholic Church in Memphis. In later life Jackie and Ron moved to Oklahoma to be closer to their daughter Kelly and her family and loved their "little house on the prairie" in Ramona. Jackie enjoyed watching her two grandchildren grow into young men and cherished the friendships she made with all of the kids and their families from the various sports activities her grandsons participated in. Jackie is survived by her daughter Kelly Cobb, son-in-law Dr. Bradley Cobb and her grandchildren Dallas and Taylor Cobb of Bartlesville. Her sister Tami Hill, brother n law Lee Hill and nephews Austin and Colton Hill of Bentonville, Arkansas. Jackie’s family will receive friends at the Davis Family Funeral Home – Walker Brown Chapel, 918-333-7665, 4201 Nowata Rd, Bartlesville, on Saturday, February 2, from 6-8 p.m. Funeral services will be held 1 p.m. on Monday, Feb. 5, at the Memorial Park Cemetery in Memphis, TN. Services are under the direction of Carter Davis and the Davis Family Funeral Home – Walker Brown Chapel. Online condolences and remembrances may be shared at www.DavisFamilyFuneralHome.com.

Jacqueline "Jackie" Sue Taylor passed away on January 30, 2019 in Bartlesville, Oklahoma after a brief illness. Jackie was born November 27, 1946 in Kennett, Missouri to Jack and Suetta (Barnes) Pruett. Her father worked for Firestone and... View Obituary & Service Information

The family of Jacqueline Sue Taylor created this Life Tributes page to make it easy to share your memories.