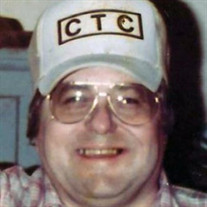 James Ernest Bell Sr., 83, of Dewey, died in Bartlesville on Saturday. James was born the son of Floyd Ernest Bell and Margaritte (Gage) Bell on May 3, 1937, in Drumright, OK. James attended Bartlesville High School and graduated in 1955. Later in life, he met the love of his life Linda Faye Tolbert. They were wedded on August 16, 1977, in Pawhuska, and the two have been in matrimony ever since. James worked in the oil & gas industry for numerous companies. He was a supervisor, machinist and a well-rounded worker. His co-workers appreciated his work ethic and always saw him as a valuable asset. If James wasn’t working, you could find him at garage sales, yard sales and resale shops, alongside Linda, carefully picking out certain valuables to take home. James and Linda loved to spend their days on the go, traveling all over the America and camping out under the stars. James was a family man and always found time to spend with his grandchildren and great-grandchildren. He was an honest and hard-working man who provided for his family, enabling Linda to stay at home to care for the family. His kids and grandkids will carry on his legacy for years to come. James is survived by his son James Ernest Bell Jr and wife Denise, daughter Cheryl Ann Bishop, step-son John Brown and wife Missy, step-daughter Melissa Brown, sister Sharon K Wade and husband Mike, brother Robert Bell, brother Tom Bell, numerous grandchildren and great-grandchildren. He is preceded in death by his wife Linda, his parents, daughter Jennifer Dawn Campbell, sister Deanie Stralie, sister Burthel Wilson, sister Luella Bell, sister Sue Bell, sister Betty Reeves, and a brother Gerald Bell. James’s family will receive friends at the Davis Family Funeral Home – Dewey Chapel, 918-534-3030, 113 S. Osage (Hwy. 75), Dewey, on Tuesday, November 3, from 6-8 p.m. Visitation will also be held on Tuesday from 10-8 and Wednesday from 9 a.m.-noon. Graveside services will be held 2 p.m. on Wednesday, November 4, at the Dewey Cemetery. Services are under the direction of Carter Davis and the Davis Family Funeral Home – Dewey Chapel. Online condolences and remembrances may be shared at www.DavisFamilyFuneralHome.com.

The family of James Ernest Bell Sr created this Life Tributes page to make it easy to share your memories.

Send flowers to the Bell family.