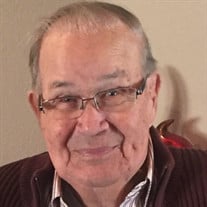 James “Bugs” Stanberry, lifelong area resident, died Tuesday in Bartlesville. The Air Force veteran was 89 when he received his eternal wings. James or “Bugs” as he was known was born the youngest of seven children to James William Sr. and Clara (Dennis) Stanberry on April 29, 1932, in Dewey. Bugs was raised on the family farm and learned the value of hard work from a young age. He attended Dewey schools, graduating with the Class of 1950. Bugs enlisted in the U.S. Air Force to “see the world” but served his enlistment at Perrin Field Air Force Base in north Texas as a Staff Sergeant and trained as a mechanic for the first jets the USAF operated from 1952-‘56. Although he didn’t get to see the world as an airman, Bugs had the good fortune to meet and marry on January 24, 1955, in Denison, TX, the love of his life Dolores Ann Hardy. Dolores became more than his life partner but his whole world. Bugs and Dolores returned to Dewey in 1956 where they would raise their daughters. Bugs went to work for Reda Pump, retiring after 42 years of faithful service in 1992. He really enjoyed the company of many co-workers who became dear friends he made over the years. Bugs was passionate about racing micro midget cars which he drove #22. He raced at Dewey and other area tracks which included a track owned by Marty Robbins. He also loved raising cattle at his home. He was avid Oklahoma Sooner fan in every way. Bugs also loved attending his church and interacting with everyone there, young and old. When their kids were young, the family enjoyed camping and taking yearly vacations with their camper and riding motorcycles. Once retired, Bugs and Dolores spent many winters in south Texas escaping the chill of Oklahoma winter. Dolores loves to travel and Bugs went along, taking several cruises and trips further away like Australia to visit friends. He was a wonderful Papa and enjoyed playing cards, games and attending the grandkids’ many activities. His kind spirit and smile will be dearly missed by his family and friends. Bugs is survived by his loving wife of 67 years Dolores; children Sabrina Rickman and Stan, and Lisa Rhodes and Greg; four grandchildren, Keri Mullen and Steve, Scott Ames and Melinda, Jeffrey Rhodes and Alexandra, and Tyler Rhodes and Natalie; and great grandchildren, Chase, Gunter, Grace, Gavin, Carter, Taylor, Fiona, Oliver, Theo and Baby Rhodes on the way. He is preceded in death by his parents, six siblings Ray Stanberry, Clay Stanberry, Dennis Stanberry, Oleta Brooks, Juanita Gay, Doris Branch, and grandson Kevin Rickman. In lieu of flowers memorials may be made to the First Baptist Church of Dewey, 300 10th St., Dewey, OK 74029. Services will be held 10 a.m. on Friday, at the First Baptist Church of Dewey, with Pastor Mark Wright officiating. Services are under the direction of Carter Davis and the Davis Family Funeral Home & Crematory – Walker Brown Chapel. Online condolences and remembrances may be shared at www.DavisFamilyFuneralHome.com.

James &#8220;Bugs&#8221; Stanberry, lifelong area resident, died Tuesday in Bartlesville. The Air Force veteran was 89 when he received his eternal wings. James or &#8220;Bugs&#8221; as he was known was born the youngest of seven children to... View Obituary & Service Information

The family of James "Bugs" William Stanberry Jr. created this Life Tributes page to make it easy to share your memories.

Send flowers to the Stanberry family.